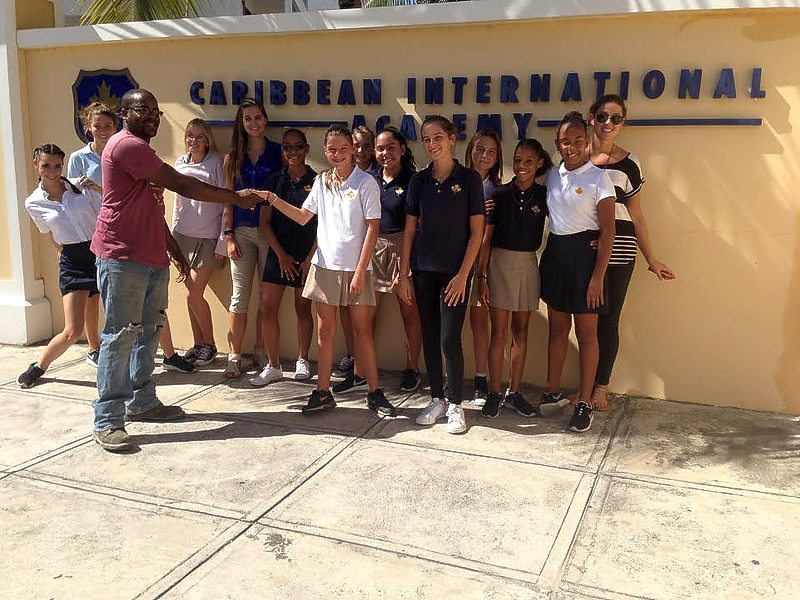 SIMPSON BAY–The Caribbean International Academy (CIA) Interact Club held a donation drive in December 2016 to help those in need in the community. The Interactors were asked to collect books, toys, personal and sanitary items, non-perishable foods and clothing for men, women and children.

The drive was so successful that the Interactors turned over the surplus items to their sponsor club Rotary Club of St. Maarten-Mid Isle for distribution on their behalf. The non-perishable food items were given to Scotiabank’s Food Drive in December 2016.

Books were put aside, as the nurses on the maternity wing at St Maarten Medical Center (SMMC) had asked Mid Isle to include books in their Baby Welcome Bags to encourage new parents to read to their babies. An assortment of books, toys and clothes were given to New Start for Children Foundation and Hope Outreach Foundation. The children’s ward at SMMC also received a selection of books, games and cuddly toys.

The remaining items were donated to The Salvation Army, including some French books which the superintendent said would be going to Haiti along with some other items.

Interact Clubs bring together students ages 12-18 to develop leadership skills while discovering the power of the Rotary Club motto “Service above Self.” Interactors connect with leaders in their community and around the world to take action to make a difference in their school and community, discover new cultures, promote international understanding, become leaders in their school and community, to have fun and to make new friends around the world.

Interact Clubs organise at least two projects every year, one that helps their school or community and one that promotes international understanding. Rotary Clubs sponsor, mentor and guide Interactors as they carry out projects and develop leadership skills.

Mid Isle will be holding its Fundraising Motor Treasure Hunt on Sunday, March 19, starting at Kim Sha Beach. See any member of Mid Isle for more information, or call 520-1052 or 520-1899. The proceeds of this event will go towards a foetal monitor for the maternity wing at SMMC and other needed items.