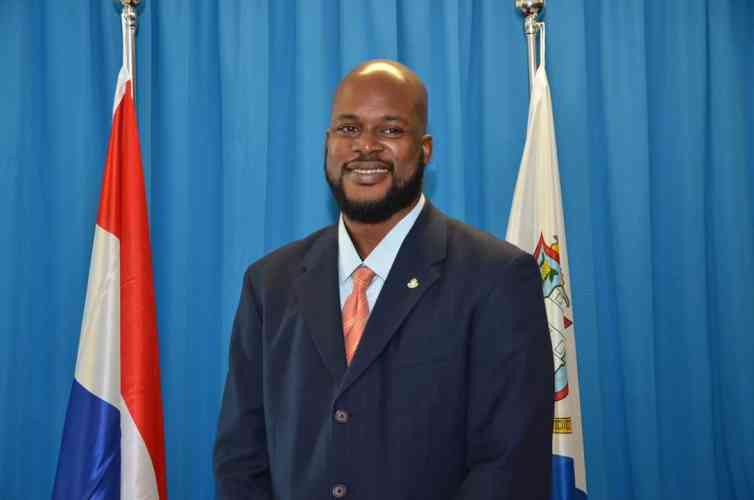 PHILIPSBURG–Minister of Public Housing, Spatial Planning, Environment and Infrastructure VROMI Miklos Giterson said on Wednesday evening that transparency is critical in decision-making. He was referring to research done on decisions made by former Minister Christophe Emmanuel.

Giterson said the research focused primarily on the issuance of 11 long lease parcels of land located on the ring road, the results of which has led to investigation of other decisions taken by his office.
As mentioned in an earlier press briefing, research was conducted on assignments for public works that were awarded to companies that raised additional questions for various reasons, the main concern being several irregularities in the awarding process. In last week’s Council of Ministers press briefing, Giterson mentioned that he would provide further clarification regarding the tennis and basketball court situation near Sonesta Great Bay Resort.
Giterson has received preliminary results of the investigation into the matter since the Council of Ministers briefing of February 14.
A number of assignments with total valuation of NAf. 336,662.92 were granted to Soualiga Infrastructure Company B.V. on October 11, 2017, by former Minister Emmanuel. The projects were: Emergency repairs to Prins Bernhard Bridge for NAf. 149,768.25; construction of a basketball court in Great Bay for NAf. 49,873.44; and emergency repairs to roadside barriers for NAf. 137,023.23 (four separate assignments: NAf. 43,087.81; NAf. 27,379.80; NAf. 47,055.45 and NAf. 19,500.17).
“In all cases, the works have a total just below the requirement for the issuance of a public tender and in each case, there were only two simple quotations received in response to the tender requests.
“This is in contrast to VROMI policy, which in the case of a non-public tender requires three quotations to be submitted with an amount above NAf. 50,000. The same two contractors submitted the quotations for the assignments in question.
“Closer review of the necessary documentation revealed several similarities, including: The first company being Soualiga Infrastructure Company B.V. with address Welfare Road 30, Cole Bay, and with managing director Jeffrey Bremer; the second company being Earth Movers Contractor with address Arrowroot Drive 6, South Reward, with Jean M. Bartlett as owner.
“This information was not found on the quotation, but was discovered from additional research performed by the Minister. It must be noted that one of the 11 parcels of land on the ring road was also issued to Mr. Bartlett in long lease,” said Giterson.
Aside from these discoveries, it was found that all assignments were issued and signed off for in one day, along with a request for a 50 per cent down payment, which was approved, for each contract prior to any work being performed and without any form of guarantee for the pre-payments or assurance of performance or the quality of work.
This is very unusual practice within Government, especially for the commissioning of public works, which brings the integrity of these assignments into question, as they do not live up to the minimum requirements of Government for the commissioning and financial management of works and assignments. This is especially true of the Great Bay basketball court, where VROMI halted construction on discovery that the project violated proper procedure.
“Especially alarming is the fact that the money used for payment of these projects was taken from the disaster prevention (Calamiteitenbestrijding) budget. The conversion of a tennis court into a basketball court in an area which has no lighting at night, thus making it unsafe for children, should not have been hastily funded from the disaster prevention budget.
“As this concerns the island’s youth, VROMI is not the only ministry required to be involved. Minister Giterson, in collaboration with Minister of Education, Culture, Youth and Sport Affairs Jorien Wuite, has since agreed to search for a more suitable location for placement of a basketball court,” stated present VROMI Minister Giterson on Wednesday.
“Incorrect practices and faulty precedents set in the past do not justify the repetition of these activities. St. Maarten’s forward progress will continue to stagnate if irresponsible behaviour is not corrected.”
The minister terminated the contract for the construction of the basketball court and is looking into the other projects awarded to the companies in question.
Regarding the issuance of land on the ring road, Giterson urged the public not to be distracted by the “locals vs. non-locals” rhetoric by those within the community.
He is in complete agreement that locals should be given opportunities to receive land. However, he also believes it is important that the proper precedent should be set and the correct procedures followed for issuing and receiving land.
“If relevant departments within the Ministry provide a negative advice against particular decisions, it is the duty of the Minister to take the professional advice under serious consideration, as well as the potential repercussions of said decisions.
“We hear much talk of transparency, but are we ready for what that looks like? It can be an uncomfortable process, peeling back the layers, but it is a necessary one to be sure that the country moves forward correctly and in a way that improves all lives and not those of a specific group,” concluded Giterson.