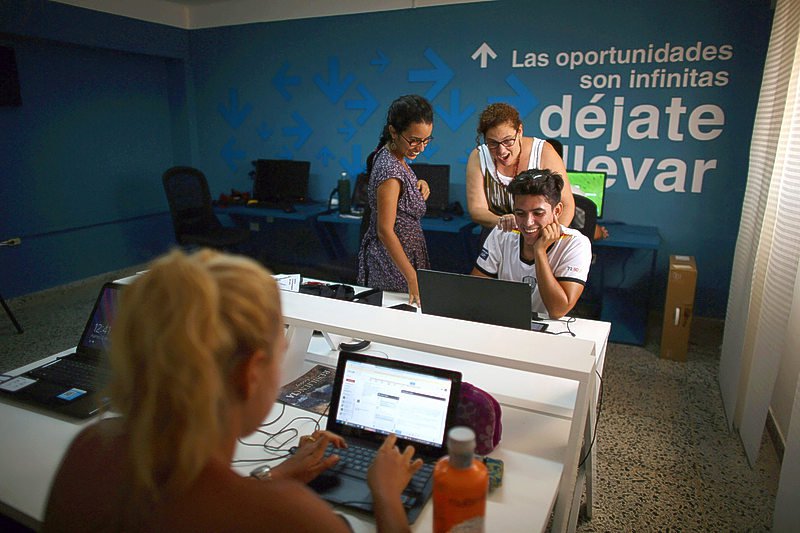 HAVANA–A handful of independent, web-based news outlets in Cuba are chipping away at the Communist-run island’s half-century state media monopoly, challenging the official version of reality.

While low levels of internet access across the Caribbean island limits the outlets’ domestic reach and they are not fully free to speak their mind, they are opening up the range of voices and sparking a debate about the role of the media in the one-party state.
“State media talks about things no one cares about and hides the truth,” said Abraham Jimenez, 27, who co-launched the online, long-form magazine “El Estornudo” (The Sneeze) in March with a group of friends. “The Sneeze was something of a reaction to this context. We want to tell the truth.”
While the Cuban constitution forbids privately-owned mass media and there are no independent newspaper printing presses in the country, web-based outlets have so far been tolerated as long as they are not “counter-revolutionary”, a nebulous term generally used against those the government accuses of trying to undermine it. President Raul Castro’s government blocks internet access to dissident media, such as the country’s most famous blogger Yoani Sanchez, as well as stridently anti-Castro, Miami-based outlets.
The new outlets, mainly run by millennials, have distanced themselves from dissident groups. Although they are often are highly critical of government policy and describe in detail everyday hardships, they are not calling for an end to Cuba’s socialist project.
Jimenez says his grandfather worked as a guard for revolutionary icon Ernesto “Che” Guevara. He does not consider himself a dissident and says his criticism is not to achieve political goals, but to present a realistic and balanced view of Cuba.
“If you never talk about a country’s good things, that’s also not journalism,” he said.
The new openness is emblematic of a wider, albeit cautious, reform program under Raul Castro, who has allowed Cubans to purchase cellphones and laptops, installed 200 Wi-Fi hotspots across the country and even fostered a small private sector. For some, the mere fact a debate about the role of the media is taking place is a sea change.
“In the Cuba I grew up in, that debate would never have existed,” said Hugo Cancio, founder of media platform OnCuba who says he moved to the United States 35 years ago after being expelled from school for making a joke about revolutionary leader Fidel Castro.
The new tolerance may not last. The Communist Party newspaper Granma has published a series of increasingly angry attacks calling for restrictions on the new competitors, who have lured away some of its journalists by offering higher salaries and more freedom. The critics link the new media to U.S. government financed outlets such as Miami-based opposition Radio Marti and Television Marti that seek to undermine the Cuban government.
“Cuban institutions have a legitimate right to adopt required measures in the face of tendentious journalism,” the paper’s Iroel Sanchez wrote on Wednesday in a column. Sanchez called the new outlets “Trojan horses” set on attacking Cuba’s existing journalists and creating a “media aristocracy.”
The new media mavens, like the rest of Cuba’s entrepreneurs, already face tough challenges. For one, most cannot get government accreditation as journalists. Financing and logistics are also tricky.
Insiders at OnCuba, which overlooks Havana’s sweeping seafront and by describing itself as foreign media has become the only one of the new media crop to win official accreditation, say it has softened its editorial line recently in order to keep its permit.
Cuba remains one of the world’s least connected countries. Fewer than 5 percent of homes are estimated to have internet and access at Wi-Fi hotspots around town costs $2 per hour – a hefty sum in a country where state wages average $25 per month.
“We used to leave the office, go to a park to connect and then return,” said Robin Pedraja, 29, editor of Vistar, a digital magazine about youth culture, speaking moments before a photoshoot with an up-and-coming Cuban singer at its airy office, decorated with contemporary Cuban art and enjoying a fine views of Havana. “Now we have a system that grabs the signal in a park and brings it to the office, although we are still paying. It’s a bit expensive but better than what we did before.”
Vistar is a glossy magazine also popular abroad – each edition is downloaded on average 50,000 times – and says it earns revenue from advertising, including Mexico’s Sol beer and Silver Airways, which serves Florida, the Bahamas and now Cuba.