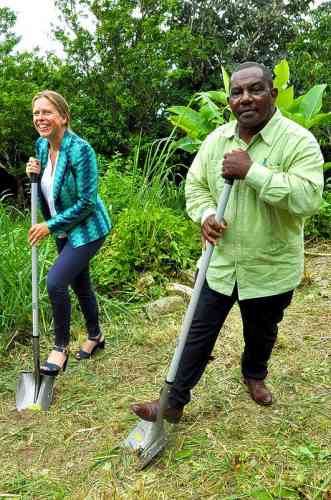 Minister of Agriculture Carola Schouten (left) and Commissioner Rolando Wilson perform the Rendezvous Farm ground-breaking with a spade on Monday.

The unveiling of the sign at Rendezvous Farm by Minister Carola Schouten and Commissioner Rolando Wilson.

SABA–With the turning of a spade, Minister of Agriculture, Nature and Food Quality, Carola Schouten and Commissioner of Agricultural and Social Affairs and Public Health, Roland Wilson performed the ground-breaking for the Rendezvous Farm project on Monday, September 2.

As part of this agricultural project financed by the Dutch government, construction of two regular greenhouses, a hydroponic greenhouse and other infrastructure will start this month. The project will provide fresh produce, including lettuce, tomatoes, sweet peppers and spinach, in the course of 2020.

Through the Ministry of Agriculture, Nature and Food Quality LNV and the Regional Envelope, 1.1 million euros were made available for agriculture on Saba. The total project cost is a little more than US $1.2 million.

Part of the funds were used to purchase the land at Rendezvous late last year and to draw up a plan. With the remaining funds, the greenhouses will be purchased and the infrastructure will be built, along with a water-storage facility, storage building and a small office. An area for regular farming will be part of the project which covers 6,400 square metres.

Wilson said in his speech at the ground-breaking ceremony that he was very happy to host the minister and her delegation. “When I learned that she would be visiting Saba, I decided to do the ground-breaking with her, since the funds came from her ministry. This is an important project for the people of Saba, as this will reduce the cost of fresh produce. I also want to congratulate Saba. This is your project.”

He announced the possibility of getting the new water pipeline up to Rendezvous Farm in the future to ensure a steady water supply.

Schouten mentioned in her speech that it was not always easy to have a steady supply of fresh produce on an island like Saba which largely depends on the import of food. She commended Saba for this and other projects to grow fresh produce at The Garden in The Level and The Farm at Hell’s Gate.

“And with the addition of the Rendezvous Farm, it will provide a steady supply to the stores and restaurants. You harvest today and it will be available right away, with no cost of transport,” Schouten said.

She lauded the good cooperation with the public entity Saba to realise this project. “This is what cooperation looks like. It is what the people need: to make sure that there is good quality and affordable food. We will continue to work together for the people of Saba. Hopefully this is a good start for many more projects,” she said.

The ground-breaking ceremony was attended by members of the Executive and Island Councils, several government officials and representatives of Saba Reach Foundation.

Prior to the ground-breaking, Schouten and her delegation had separate meetings with the Executive and Island Councils. During these two meetings, she was updated on current developments and projects, and various subjects were discussed.

Schouten and her delegation visited Fort Bay Harbour in the early afternoon, where Commissioner of Infrastructure Bruce Zagers provided an update on the harbour project. A large part of this multi-million-euro project will be funded through the Regional Envelope of the Dutch government through the Ministry of LNV.

Zagers informed Schouten about the process of the harbour project and a meeting that is planned with the Ministry of Infrastructure and Water Management I&W early October regarding the location of the new/expanded harbour. Zagers and Island Secretary Tim Muller will attend this meeting in The Hague.