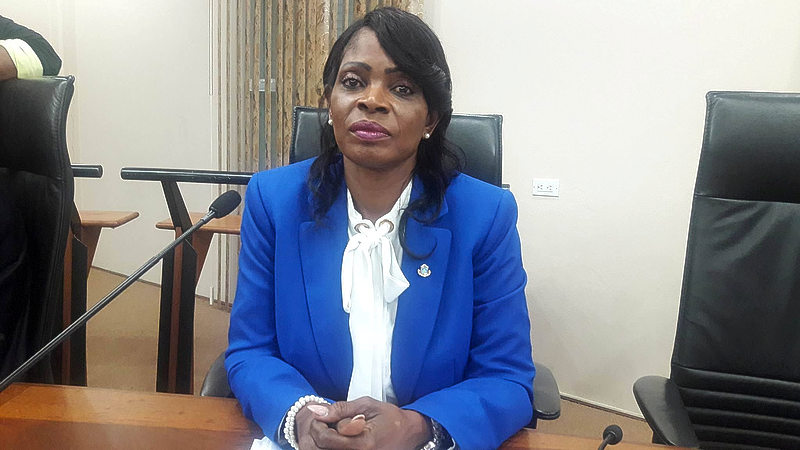 PHILIPSBURG–Minister of Tourism, Economic Affairs, Transport and Telecommunications (TEATT) Ingrid Arrindell is not happy with the recent statements made against her ministry and Rolando Brison who is the presumptive Interim Director of the first St. Maarten Tourism Authority (STA).

Local newspaper Today recently called Arrindell “the lying Minister.” Arrindell said in a lengthy statement issued on Monday that the innuendos, accusations and condemnations made toward her in that paper’s editorial in which it was stated that it appeared that she had been lying about Brison’s candidacy as Interim Director of STA were incredulous.

The report also said that, contrary to what Arrindell had claimed in August, Brison was not the top candidate selected by every member of the Selection Committee. This was nothing but an inept attempt at character assassination, she stated.

“Contrary to what has been reported in the media, there was never an agreement to perform background checks on all three candidates. Such a decision would certainly not have been in keeping with normal business practices, given that one candidate had already been selected as the preferred candidate.

“The background check was, therefore, initiated and, in the interim, an offer letter (not the ultimate labour contract) was presented to Brison. It had been agreed that the background check would consist of the normal, standard requirements: Background check specifically at Winair due to vague rumours that had circulated in the past, requests for references from previous employers, a police report and a health report,” Arrindell recalled.

The sly innuendos that a Member of Parliament (MP) was somehow involved in Brison’s selection are clearly totally false, added Minister Arrindell.

“The honourable MP happened to be in the building on other business when the offer letter was to be presented to Brison and, given the importance of the event and out of professional courtesy, the MP was invited to witness the signing. That was the full extent of the MP’s involvement. At no other time, in any way whatsoever, was the MP involved in the selection process,” said Arrindell.

“It is irony of epic proportions that the Supervisory Council of the STA has the audacity to state that they cannot and will not support Brison as director. On what basis can such a declaration be made? Brison passed the background check after being overwhelmingly nominated as the top candidate over and over by the Selection Committee.

“Supposedly we live in a democratic society in which people are not judged based on rumours, but on facts – especially when those rumours have been debunked time and time again. Brison received a clean police record. Brison’s former employer Winair, where fraud was allegedly committed, provided a positive reference, and other former employers, colleagues, and associates provided glowing recommendations,” said the Minister.

“So, what should the Minister do? Cast aside and ignore the fact that Mr. Brison (in an open and fair selection process) was overwhelmingly chosen to be the director of the STA? Should she cast aside the fact that his background check showed absolutely no reason to deny him the position, but on the contrary, gave full and overwhelming support of his ability to hold the position?”

Arrindell also asked, “On what basis then is the STA’s Supervisory Council stating that they cannot support Mr. Brison as the director? Since it has been proven that he is eminently (professionally) qualified and there is nothing in his past to disqualify him, perhaps there are other qualifications that he lacks? Does he have the wrong nationality/ethnicity (Dutch/local St. Maartener) perhaps? Does he associate with the wrong people (other young, local entrepreneurs instead of elitists) perhaps?

“During the final days as the Minister prepares to leave office, these incorrect and malicious distortions of the truth are presented to the public. During my term as Minister I have acted in the best interest of the people of St. Maarten. I have acted with complete integrity and good will. I tried to ensure that a qualified, young, local St. Maartener got the position that he is eminently suited for – in other words, I practiced what I preached.

“It appears that once again, however, some groups among us continue to do their best to destroy the character and spirit of one of our own – a young man of so much potential. And, why not try to kill two birds with one stone, why not try to destroy the character and reputation of the Minister who tried her best to ensure that that young man got the position he so rightfully deserved?”

In her closing statement Minister Arrindell considered demanding an apology for, or at least a retraction of the totally incorrect and misleading information presented by the Supervisory Council, and the relish with which the “editor” of that “newspaper” so happily published those lies and misrepresentations of the Supervisory Council.

However, she said, “I recognize that our local St. Maarteners are discerning people who have become very familiar with how a few of those among us continually try to destroy our local professionals.