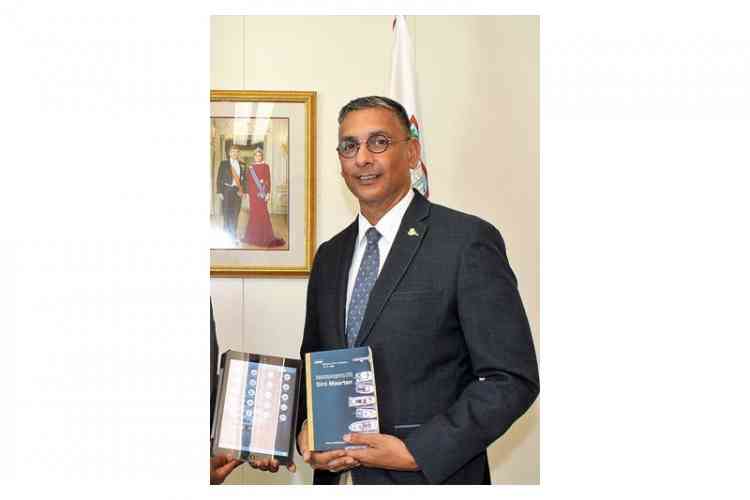 PHILIPSBURG–Finance Minister Perry Geerlings on Wednesday gave an insight into the country’s financial recovery plan for the years 2018 to 2022.

In painting a picture to depict why the plan was necessary, Geerlings said St. Maarten achieved the status of country within the Dutch Kingdom on September 10, 2010, with a collective debt as a country of NAf. 400 million. From 2010 to mid-2017 the collective debt increased by 40 million guilders due to a number of factors, including accumulated budget deficits as a result of lack of proper financial management and “less than expected compliance” from residents and companies.

In 2017, the island was struck by Hurricanes Irma and Maria resulting in additional deficits estimated at approximately NAf. 320 million. Geerlings said the recovery and resilience efforts of the country after Irma and Maria were estimated to be in the vicinity 4.2 billion guilders.

The minister said four major risk areas were identified: government’s severe budget shortages; the country’s worsening public financial management; unfunded social security and pension plans and “no well-being” for residents. With the current financial state of the country, Geerlings said a plan was necessary for the country to recover as soon as possible.

According to the plan, from 2018 to 2019, the country will continue with its restructuring and recovery process; as of 2020 it is the intention through the plan to achieve a balanced budget and from 2021, the country should be able to compensate past budget deficits with budget surpluses.

The minister said several steps will be taken to reach the objectives of the plan. These include taking responsibility as country by achieving a balanced budget by 2020 and realizing surpluses from 2021; financing part of the Governing Programme initiatives and improving the country’s public financial management.

“These are three major points that we need to take care of ourselves. This will create stability on our end,” Geerlings told reporters at the weekly Council of Ministers’ press briefing on Wednesday.

He said due to the magnitude of the financial issues that St. Maarten faces, additional assistance will be needed.  “Help doesn’t mean that we need money… but we need help and assistance to get additional loans and have them approved…. We need to get the necessary financial assistance for initiatives in governing programme.”

He said also that since St. Maarten is under financial higher supervision, the Committee for Financial Supervision and the Kingdom Council of Ministers would have to give the green light for St. Maarten to be able to borrow. This is one of the issues that Geerlings and Prime Minister Leona Romeo-Marlin will be discussing during their trip to the Netherlands next week.

St. Maarten would also need to seek loans and grants internationally to cover “the remaining gap” of items in the governing programme including the National Recovery and Resilience Plan (NRRP). He said while the Netherlands will provide assistance to the country to the tune of US $550 million, if the overall damage is assessed, for St. Maarten to fully recover, the country needs close to one billion dollars. “If we would have the opportunity to get the billion, we would be able to take care of things asap. However, if we take care of our own things first, take care of our responsibility first, we might not even need that amount of money.”

The financial recovery plan can be read in full on government’s official website.