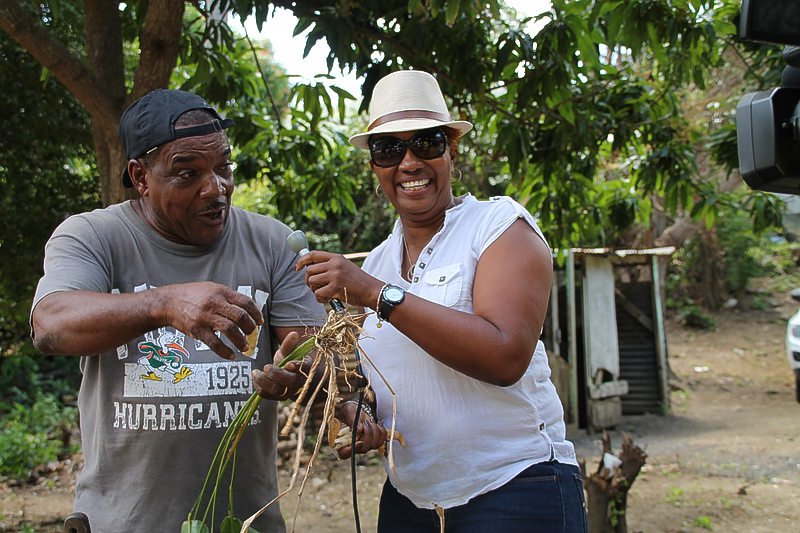 PHILIPSBURG–Minister of Culture Silveria Jacobs attended the Arrowroot Jollification in Colombier, French Saint Martin, last week Saturday. The Association de Nature Valley Colombier organised the event during which the plucking, washing and pounding of arrowroot were on display.

Gilbert Gibs has been a part of the Colombier community for most of his life and has been invested in keeping the arrowroot tradition alive. Gibs has been very active in the renewed interest in the growing and cultivating of arrowroot together with other male family members and friends.

He explained to Minister Jacobs the process by which arrowroot grows, once the smaller pieces picked are planted back in the ground. He also explained that the younger generation needs to get involved and learn the process, as Gibs and his fellow farmers are aging and can no longer dig and pound the arrowroot as before.

“The younger generation needs to be motivated to be more involved when it comes to maintaining our heritage. While arrowroot is a product we can always purchase in the store, the mere fact that we can produce it right here in St. Martin is a cultural tradition of our heritage we must keep alive,” Jacobs said.

She commended the Colombier Association for keeping this part of St. Martin’s heritage alive. She was impressed and excited, as was everyone else present, to learn about the process. “I would like to congratulate the association on a well-attended and well put together event,” she said.

Generation New Status band, under the leadership of Youmay Dormoy, and parents were also in attendance and the band entertained the audience for more than 30 minutes. Local food, natural drinks, homemade snacks and souvenirs were also on sale at the Jollification.

The Culture Ministry has been in the process of adding agricultural projects in various schools with the goal of agriculture being added to the curricula in both elementary and high schools. The pilot agriculture project was started in 2016 to get students and teachers in the public schools engaged in agricultural gardens at the schools.