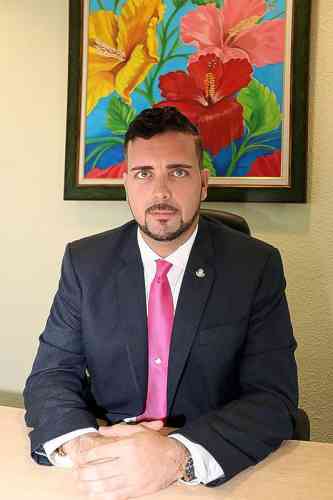 PHILIPSBURG–“Over the past few days, Facebook and other forms of media have been buzzing with fake claims as it relates to my person,” said Tourism Minister Stuart Johnson during Wednesday’s Council of Ministers press briefing, referring to allegations of making sexual advances towards a former cabinet worker recently.

He said, “I have taken note of such, primarily because my integrity and character are falsely being slandered. It is unfortunate that this type of gossip serves as a distraction from the work towards rebuilding of the economy of St. Maarten.”

Johnson came under fire after WhatsApp conversations between him and the now-former member of his cabinet F.T. began circulating on social media sites over the weekend. He said on Wednesday that he had filed an official complaint with the police on Monday.

“As the matter is now under investigation, I am not at liberty to discuss any information regarding the subject matter. I intend to continue focusing on the task of revitalising the economy,” said Johnson.

Members of the media attempted to get more information from him, but he maintained that the matter is being investigated and he would not be able to provide details at this time.

A local Lesbian, Gay, Bisexual, Transgender, Queer or Questioning and Intersex (LGBTQI) group was not amused by the derogatory remarks made by some persons on social media about the sexual orientation of the minister and his former staff member.

In a statement to The Daily Herald they said, “To the issue of consent, coercion, sexual harassment and abuse of power at the workplace that has recently come to light on social media, St. Maarten/St. Martin Alliance For Equality (SAFE SXM) would like to state that the issue is not an LGBTQI issue, but a human and human rights issue.

“People are entitled to a safe work environment and should not feel as if their jobs are at stake because they refuse to give in to what is tantamount to sexual harassment.

“This particular case is reflective of a larger issue that occurs daily in our society, mainly impacting girls and women. This current case involving two men should not shift attention towards sensationalism and away from the fact that ‘no’ means ‘no,’ or should mean ‘no,’ period; that this ‘no’ should be respected regardless of sex, gender, race, immigration status and orientation, etc.

“No one individual or group of individuals should decide that someone’s ‘no’ should be a ‘yes’ and take away that person’s autonomy or agency. SAFE SXM condemns this vehemently.

“For many in the LGBTQI community this issue hits close to home, because they too have been victims of sexual harassment and often sexual misconduct, including rape. For SAFE SXM it is important that we address the issue of consent comprehensively and once and for all, as a country and as a region, stand up to all forms of abuses.

“Consent is important and cannot be coerced. Sexual harassment and abuse of power are not okay under any conditions at any time; not at work, not in the streets, not at home. We encourage those impacted to contact the authorities and have the matter dealt with through proper channels.

“To the wider St. Maarten/St. Martin public: this is not a joke. For too long we have shied away from addressing the abuse of power, specifically concerning sexual relations, on our island. The #metoo movement showed us that this is no laughing matter, that #wetoo have to do the work to make St. Maarten/St. Martin safer for our girls and women and, yes, our boys and men.

“This is a moment that as a country we can discuss what our standards are, how we want to tackle the subject of sexual misconduct and how we want to move forward. It is a moment that ALL skeletons should and can be taken out of the closet and be examined, and we can as individuals and as a collective decide that we can do better, we must do better and we will do better; that we can and will hold ourselves and each other accountable on the issues of consent and sexual abuse.

“SAFE SXM is open to continuing to dialogue with all persons, organisations and levels of government about the continued development of a safer island for us all.”