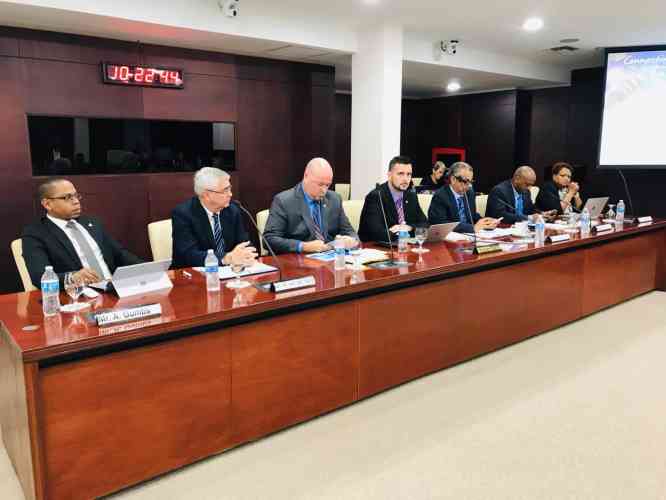 Johnson said during his lengthy presentation, “After taking office at the end of June this year, I made it a priority to concentrate first on ensuring that our small and large hotels were receiving the support they needed as it relates to re-investing in the rebuilding and in some cases even expansion of their resorts.

“While this was being done, the airport was engaged in negotiations regarding the liquidity issues that were on the horizon and which had required a guarantee letter several months before my time in office began, but was unfortunately not addressed.

“Despite these challenges, we have continued to keep a watchful eye to ensure the airport and harbour ready themselves for visitor arrival. We have also been engaging local businesses to ensure that especially those who suffered significant hurricane damage, had the necessary support from the Ministry of Economic Affairs.”

Cornering rumours of layoffs at the airport, he said, “It would be remiss of me to mention the developments taking place there without first putting to rest the irresponsible reports carried by the local media which suggested that plans were being executed to lay off employees. This is just not the case.

“There is also no truth to the claim that the Government intends to sell the airport to anyone. This misinformation has created unnecessary panic within the community and has left the almost 300 workers and their families in a state of worry. If left unchecked, this inaccurate information has the potential to undermine ongoing discussions with our bondholders and potential lenders.

“The airport has maintained its permanent staff since the passage of Hurricane Irma despite the enormous financial challenges it faces each day. And, despite these challenges, the airport continues to operate with the clear focus of finalising the repairs to the main terminal building by December 15 this year. We also intend to conclude renovations to the FBO [fixed-base operations – Ed.] Terminal and complete US pre-clearance by 2020.

“However, the cost of repairing the airport using its operating funds and reserves has come to bear, and the airport is now seeking a soft loan to tide it over until the negotiations are completed for the full amount of the reconstruction funds to be realised.”

Johnson said the approach of using the operating cash and reserves for repairs, while seemingly necessary to reduce the time it would take to bring the airport back online, is no longer feasible and puts the airport in a financially precarious situation.

“At present, the Airport’s monthly burn rate stands at two million guilders. While the issue of liquidity is being directly addressed, it is necessary, for the sake of protecting these ongoing discussions, that I do not prematurely divulge information that could hamper what we believe will be a fruitful outcome,” stated Johnson.

“While funding comes with conditions regardless of the lenders, we will ensure that as shareholders for these government-owned companies, the interest of St. Maarten and its people remain the priority and that temporary financial solutions do not change the look and ownership of these facilities. I am happy to report that Airport SXM has been given a third ‘limited waiver’ by the bondholders until February 2019.

“This waiver comes with a second amendment which includes the bondholders’ insistence that revenues collected from the insurance pay-outs will not be released to assist with operational expenses and will only be released for the reconstruction of the airport once the matching funding totalling 100 per cent of the reconstruction needs is secured.”

The available cash flow for the airport presently stands at NAf. 3,202,089 and US $5,763,760 in the bank. There is NAf. 68,313,377 ($122,964,079) restricted by bondholders. The restricted funds comprise monies received from NAGICO and are being held in a separate account by these bondholders who will only receive the funds if the airport is able to secure a loan for operational purposes.

“PJIAE N.V. requires an immediate cash injection of $15 million to sustain the company until the EIB/Trust Fund loan or the alternative financing via a reputable investment bank/local investors is made available,” stated Chief Financial Officer (CFO) Ravi Daryanani during his presentation to the MPs.

As far as staff, “PJIAE N.V. has negotiated with the unions to freeze all benefits for a period of two years. However, we are still awaiting an official  response from the ABVO Union Group. The company will strive to continue to reduce expenses as much as possible without hampering operations and the safety and security according to airport standards.

“As a last resort PJIAE N.V. is also currently looking into critical vs. non-critical functions and will then have further discussions to reduce staffing hours to save cost.”

“Port St. Maarten, their financial situation also poses an impediment to the overall operation. While there is some progress operationally, issues such as cost associated with the repairs of Pier 1 and 2 result in the need for financial measures to help the port in its recovery efforts,” said Johnson.

Chief Financial Officer (CFO) Tom Van Kooten said during his presentation following Johnson, “The first analysis of the financial effects of Hurricane Irma on Port St. Maarten results in the following conclusions: The cash flow position of the company is critical and will remain critical in the coming years.

“Implementation of selected mitigating measures has mitigated the impact of the cash flow position of Port St. Maarten, providing the necessary inflow of cash to cover its obligations in the short and medium term. Full cooperation of the government, the bond holders, Royal Caribbean Cruise Line and Carnival will be needed for the recovery process of the company. Not only Port St. Maarten will need and benefit from a quick recovery, but also the tourism sector and the island of St. Maarten will be positively affected.”

The overall picture of the port remains positive and will get better as the high season gets better, according to port officials.

Questions about the viability and the independence of the government-owned companies were the main focus of the MPs, who gave their take on making sure that the companies are self-sufficient.

The meeting was adjourned until further notice to give Johnson enough time to answer all the MPs’ questions and concerns.