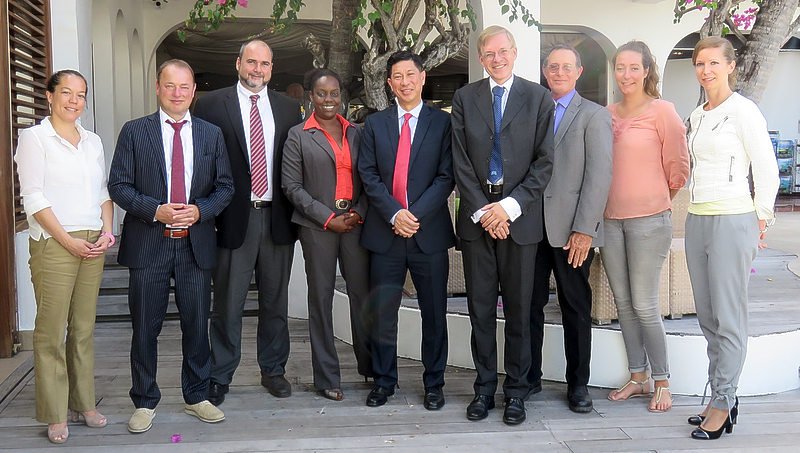 PHILIPSBURG–Cooperation between the Netherlands and St. Maarten in the area of healthcare is a top priority for Minister of Public Health, Social Development and Labour VSA Emil Lee. Representatives of the VSA Ministry led by Minister Lee met last week with a delegation from the Dutch Ministry of Kingdom Affairs led by its Secretary-General Richard van Zwol.

“The meeting was extremely productive; it was very candid and constructive. One of the benefits of our very open and transparent approach has been that other stakeholders like the Netherlands are very willing to assist,” Minister Lee said.

The discussions covered updates on the new General Hospital Project as well as developments with St. Maarten’s efforts to implement universal health coverage in the form of National Health Insurance (NHI) as well as areas for cooperation within the Dutch Caribbean.

As part of efforts to secure low-interest financing for the new hospital, the Ministry of Kingdom Affairs and the Committee for Financial Supervision (CFT) play a critical role in the approval process. As a follow-up to meetings held in the Netherlands, this was an excellent opportunity to update the stakeholders on the progress that has been made in the development plans for the new hospital, Lee believed.

Discussions also were held for the possibility of assistance for VSA Ministry regarding the development of NHI.

Lee said, “High-quality affordable healthcare close to home requires having a National Health Insurance plan in place that ensures that all residents are properly insured. We must also ensure that the public health insurance fund remains financially robust. If you look around the world and in the Caribbean, healthcare cost is increasing quickly. We need to make sure NHI is executed correctly.”

The air ambulance helicopter from Saba and St. Eustatius and the service it requires in St. Maarten is of high importance for Kingdom cooperation on healthcare. The offering of proper services at Princess Juliana International Airport SXM to the medical evacuation helicopter has been a long-standing issue that has been discussed in the Inter-Parliamentary Kingdom Consultations IPKO.

The St. Maarten delegation reported that an interim solution had been reached following discussions with the Airport and Civil Aviation, and that a more permanent solution at St. Maarten Medical Center (SMMC) also is being developed in parallel.