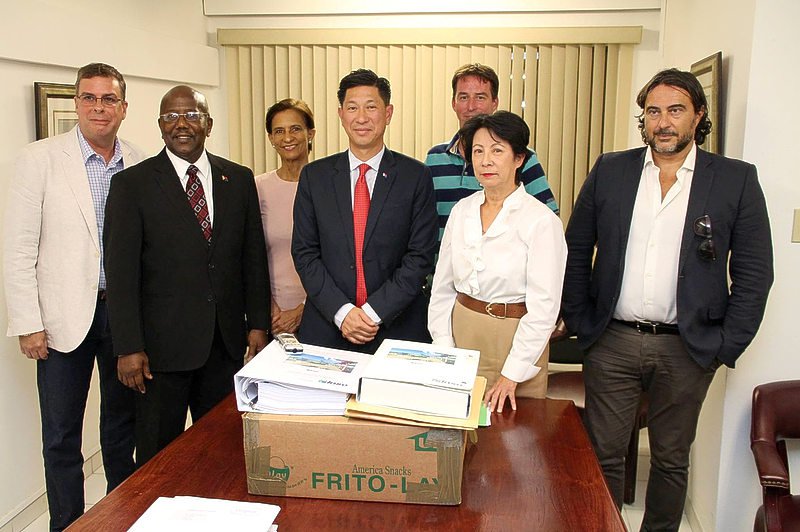 PHILIPSBURG–St. Maarten is one step closer to the construction of the new St. Maarten Medical Center (SMMC).

“As the Ministry of VSA, we continue working towards providing a high quality medical system that is affordable and easily accessible for the people,” Lee said.
Twelve initial interested bidders were narrowed down by pre-selection criteria to five. Three submitted their proposals by the Monday deadline.

To guarantee transparency, the bids were received at the Tjon A Jong and Associates Civil Law Notary office on Front Street in the presence of the awarding team consisting of representatives of the VSA Ministry, SZV, SMMC, project leader KPMG and engineering consultant Royal Haskoning DHV.

“I would like to thank everyone who put in so much effort into this bidding process, especially to the bidders that have invested a lot of time and energy to prepare their bids,” said Minister Lee.
Prime Minister William Marlin and Parliament Chairwoman Sarah Wescot-Williams also were present to witness the receipt of the bids.

Marlin congratulated Lee, the Ministry and SZV for bringing transparency, speed and efficiency to the realisation of the new medical centre. He also thanked everyone who had participated in the process and wished the Ministry, SZV and all others involved a continuous pleasant and positive journey.

The hospital project includes sufficient parking, medical equipment, furniture, related information technology, the maintenance of the facility and the demolition of the existing hospital building. Now that the Ministry has received three completed bids, the awarding team will evaluate the bids following a professional and transparent process guided by independent parties. It is expected that the contract will be awarded by the end of August.

“The notary was responsible for verifying that all the submissions were done according to what was required by the terms of reference and to ensure that the bids were received in a timely manner,” said Lee. “I am very optimistic and confident that we are on the right track to delivering the people a state-of-the-art hospital that can provide quality healthcare at affordable rates.”

The original bids were given to the notary to avoid any possible future discrepancies and will be held at the notary office to ensure that the integrity of the bids remains uncompromised.