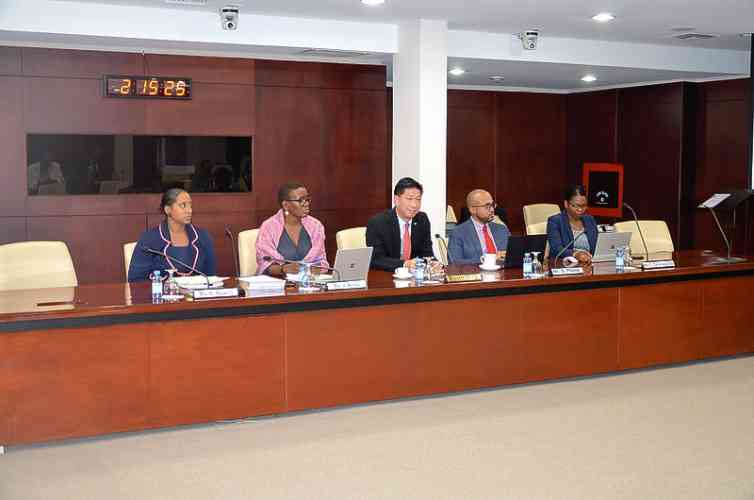 VSA Minister Emil Lee (centre) and members of his support staff in Parliament on Thursday.

PHILIPSBURG–Minister of Health, Labour and Social Affairs VSA Emil Lee on Thursday responded to a number of questions he received during the meeting of the Central Committee of Parliament on the draft 2019 budget.

In responding to a question on what the Ministry is doing regarding medical marijuana, Lee said the Inspectorate of Health is in the process of finalising an execution policy which takes into consideration the existing legal framework and makes it possible to import, store, distribute, prescribe and dispense medicinal cannabis in a controlled manner. It does not cover the cultivation of the product.

Asked about the projects taken up in the budget related to the social and emotional matters of the population, Lee said a project proposal for psycho-social care following a disaster is currently being prepared by the Ministry of VSA to be submitted to the Council of Ministers, and subsequently the Steering Committee for funding via the Trust Fund.

This project proposal will include Mental Health Foundation (MHF) psychiatric care as well as the broader spectrum of psycho social assistance. It will outline the different types of assistance needed immediately after disasters to address post-traumatic stress disorders. The trainings for this have already started in 2018 with trainings of professionals within government and non-government organisations, first responders, as well as Emergency Support Functions (ESF) and community representatives.

He said previously, MHF received a subsidy which was dependent on government’s available cash flow. “To ensure that access to this basic care is not jeopardized, psychiatric care via MHF is being paid by SZV (Social and Health Insurances) through a preliminary budget agreement based on production, pending the legislative process of adjusting the tariffs which will lead to a more sustainable and controllable financing structure.”

On the issue of consultancy fees, the minister said in 2018, NAf. 472,989.25 was paid in consultancy fees for the Ministry. The tasks covered included legal advice to the Minister, as the position for legal advisor was vacant until mid-2018; secretariat and administrative support for appeals committees of the Ministry of VSA; medical advisor to ambulance services which is mandatory by law and is filled by a consultant because it is only 0.2 Full Time Equivalent (FTE); coroner/medical examiner, which is a legal requirement for a medical doctor to pronounce the death of persons in care of ambulance services and legal advisor for the Department of Labour.

Asked what the Ministry is doing about alcohol and tobacco in terms of generating more income for government, Lee said: “VSA is not working on this legislation as it falls within the purview of the Ministry of Finance in the drafting of the national ordinance revision tax system. The ministry does support these actions as we see it as a way to increase health prevention and decrease health cost.”

Lee touched on several other issues while responding to questions, including vehicles received by the ministry after Hurricane Irma and how the budget of his ministry relates to the governing programme, amongst other issues.