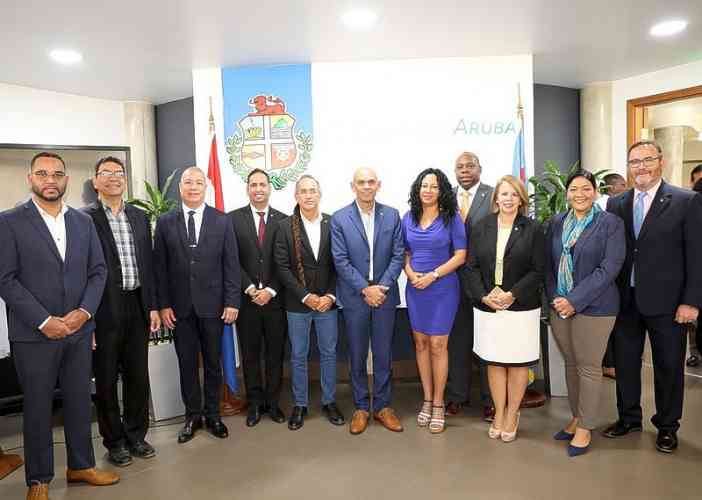 Aruba Minister Otmar Oduber (centre) flanked by colleague ministers and a few Members of Parliament as he announced his resignation per December this year.

ORANJESTAD–Aruba Minister of Physical Planning, Infrastructure and Environment, Otmar Oduber will be stepping down in December. He cited health and family reasons for his decision to depart. “My body is tired,” said Oduber. Succeeding him will be Member of Parliament (MP) Marisol Lopez-Tromp.

Oduber is the co-leader of the POR party which is headed by Justice Minister Andin Bikker. He has lost a lot of weight and has had several operations in the past few years. “I am not dying. I want to enjoy my pension, but in order to reach that age, I need to take better care of myself,” he told the media, flanked by colleague ministers and a few MPs.

Oduber was Minister of Tourism and Transport in two previous AVP cabinets of Mike Eman, from 2009 to 2016. He said being a minister was heavy work. “The job demands a lot from you. It takes a toll on your body and I never took the time to get rest,” said Oduber, who admitted that it had not been an easy decision to leave.

Until he leaves per December 12, the minister will conclude a number of projects and transfer his work to the new Minister Lopez-Tromp. Succeeding Lopez-Tromp in the Aruba Parliament will be Dellanire Maduro.

Oduber announced his departure from active politics on Tuesday morning, in the presence of all Members of the Council of Ministers. “This is not an easy moment, not a moment that I didn’t see coming,” said Prime Minister Evelyn Wever-Croes, referring to the fact that Oduber had already announced on earlier occasions that he wanted to retire.

Wever-Croes said it was no secret that two years ago, before entering government, the relationship with Oduber was not friendly because he was a political opponent. After the elections, the MEP party of Wever-Croes, the POR party and the RED party decided to form a government.

About that cooperation Wever-Croes said: “For Minister Oduber it hasn’t been easy either. But no matter the differences of opinion that we often had, we didn’t focus on what divided us, but we focused on working together for our people.”

The prime minister thanked Oduber for all the work he has done in the past two years. “Thank you for being an engine behind government. We will surely miss you. But for now, we don’t say goodbye because in the coming months you will continue your job with the same love and strength.”