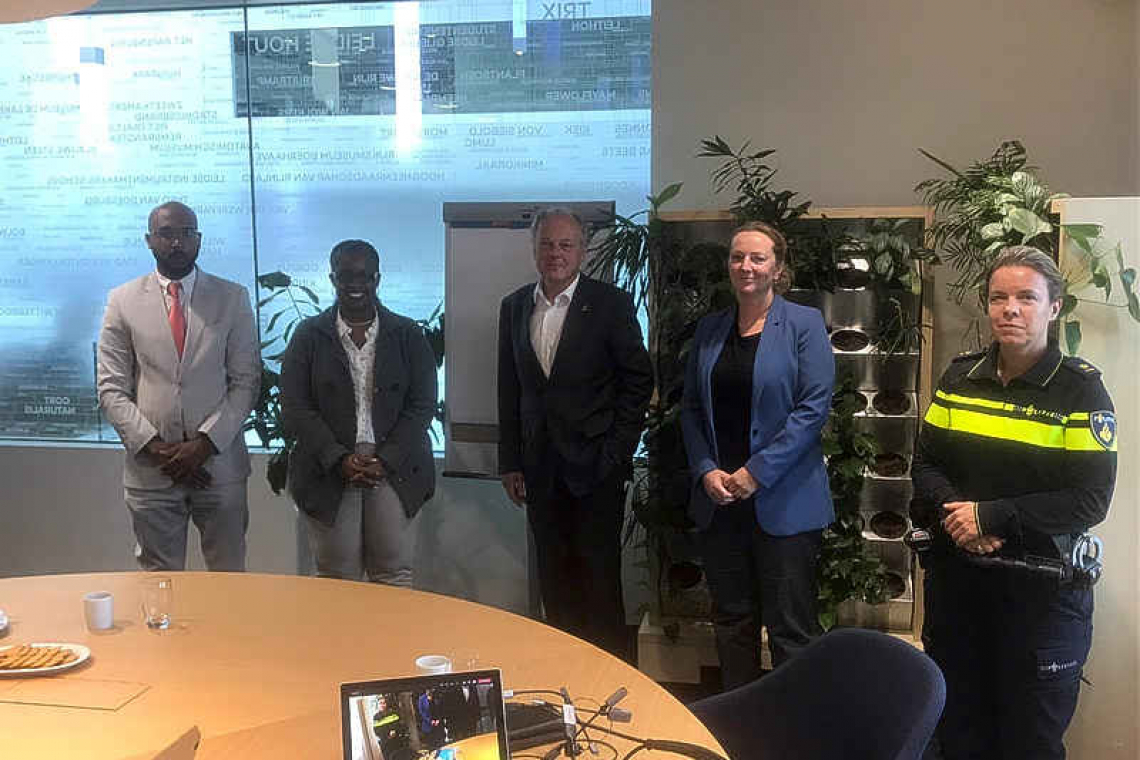 LEIDEN–St. Maarten’s Minister of Justice Anna Richardson and her support staff met with Mayor of Leiden Henri Lenferink, District Chief of Police Marieke Bosch and Prosecutor Fleur Simonis on September 22. The meeting was arranged for Richardson to gain an understanding of how the “triangle meeting” (driehoeksoverleg) functions in the Netherlands.

In Leiden, the “triangle meeting” is held once a month to discuss issues that impact the municipality. In St. Maarten, the meetings were agreed to be held quarterly.

Lenferink explained that the triangle operates from a safety plan developed and agreed on by majors of cities who also hold meetings with stakeholders in the community. This sort of systematic approach differs from that of St. Maarten, as those discussions are mostly based on the topics that have been placed on the agenda for that meeting and are then discussed amongst the Minister of Justice, the Prosecutor and the Chief of Police.
“One of the positive aspects of this work visit to the Netherlands is gaining more insight in the way certain structures are intended to function and how beneficial these meetings can be once utilised in the correct structure and manner,” Richardson said.
Lenferink said during the meeting, “Safety and security are all about collaboration with all organisations involved that contribute to a positive result.”

Richardson fully agreed. “Though it is recognised that our structures differ due to geographical size, I believe that adapting an approach with a safety plan as the point of departure and applying it in St. Maarten can contribute positively to the current situation.”
Richardson also met with Mayor of Leidschendam-Voorburg Jules Bijles and they discussed public safety and security matters. Bijles explained the structures and procedures of his organisation and gave a presentation that specifically delved into the assistance of the municipality community officers.

The municipality community officers can be seen as equivalent to St. Maarten’s Community Police Officers (CPOs), Richardson said. “These are ‘BAVPOLers’ and take on minor offences and tasks such as supervising public areas, offering fines and so on.”

Recognising the plus of the CPOs, Richardson sees a great opportunity to increase the number of this division with the aim to outfit St. Maarten’s schools and school districts for heightened law enforcement presence and quicker action.

“We recognize strategies used by those who wish to continue with negative behaviour such as assaulting other students and more. As such, efforts will be made to heighten and tighten every area possible,” said Richardson. “On my return, this will be one of the prioritised agenda points that will be discussed with the Chief of Police, Prosecutor, Minister of Education, Culture, Youth and Sport, schools’ boards and other stakeholders as a plan of action to protect our students, faculty, staff and communities.”

Richardson’s evening ended with a dinner hosted by members of the Progress Committee President Nico Schoof and Michel Marijnen. The latter also invited Alphen aan den Rijn Mayor Elizabeth Spies to the dinner, giving Richardson an opportunity to dialogue with a third Mayor with more than seven years in service.

“I experienced a full day of interaction with persons who have a vast amount of knowledge and experience when it comes to managing safety and security in their communities, working with the relevant authorities tasked to do so, and who passionately hold interest to make a positive difference in the communities as I also aim to do,” Richardson said.