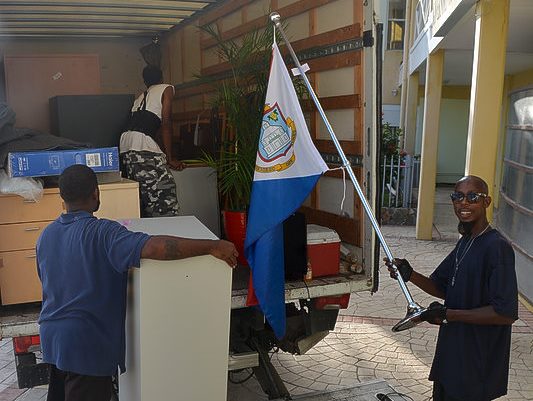 PHILIPSBURG–Members of the Council of Ministers have started to relocate to the new Government Administration Building.

Prime Minister William Marlin told reporters at the Council of Ministers press briefing on Wednesday that an opening ceremony of the building would be held tomorrow Friday, September 23, at 10:00am.

Marlin said he made a promise to complete the building and move in and this is being done.

The relocation will start with the Council of Ministers and their support staff. He said computers for Ministers have already been disconnected and documents boxed and labeled for the move. Relocation was scheduled to begin on Tuesday evening and was expected to continue all day yesterday, Wednesday and continue into Friday. Workers will also start to set up the offices of the various Ministers and their support staff.

Once the Council of Ministers has relocated, Government’s Finance Department will be the next department to move. Marlin said a “moving plan” is in place for the other departments to relocate to the building. Facility Services and their personnel are also in line as one of the departments to relocate in the early stages as well as the Ministry of General Affairs.
With the opening of the new Government Administration Building Friday, several years after it had been sitting empty, Marlin said he has proven that “another promise made, is a promise kept.”
Source: Daily Herald
Ministers start relocation into new Government Building, opens Friday

MP Akeem Arrindell declares himself an Independent member of Parliament. ...