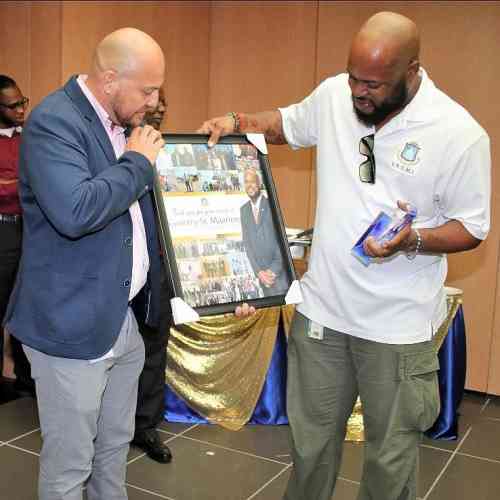 PHILIPSBURG–It was a bittersweet afternoon at the Government Administration Building as civil servants in the Ministry of Public Housing, Spatial Planning, Environment and Infrastructure VROMI said farewell to VROMI Minister Miklos Giterson on Wednesday, August 21, the eve of his birthday.

Giterson received a huge surprise when he was asked to go to the Chambers of the Council of Ministers. Inside were dozens of VROMI Ministry staff members who screamed “Surprise” as he entered the room.

Set to officially leave office on September 1, Giterson has been the caretaker VROMI Minister since he resigned from office a few months ago. During the pre-birthday surprise celebration and farewell, Chief of Staff Chris Wever, on behalf of the VROMI Cabinet, presented Giterson with several gifts, including a personal crystal award.

Plaques showing some of the work that Giterson did in office were amongst the gifts he received.

In a brief address to those in attendance, Prime Minister Leona Romeo-Marlin said she was not happy to see Giterson leave, adding that some things were “not fair.”

“I did not want to come here, because I don’t feel good about what has happened. But I promise I will not say goodbye,” she said.

With teary eyes, she also gave several gifts to Giterson, which she said were part of a tradition for departing ministers.

“I did not have a speech prepared, but I am touched by what you all did,” Giterson said.

He called his mother, former Education Commissioner Valerie Giterson-Pantophlet, to the centre of the room and said he had always thought that he did not want to follow in her footsteps, “but I am very happy that I did.”

Giterson spent much of the afternoon exchanging pleasantries with his colleagues.