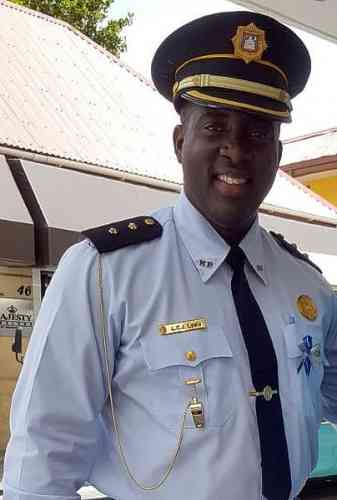 PHILIPSBURG–Police Inspector Lyndon Lewis represented his colleague Rignalda Stefania of the Immigration Department in the Court of First Instance in a case against the Minister of Justice on Thursday, December 12.

Stefania is a civil servant since 1992. Since St. Maarten became a Country within the Kingdom of The Netherlands, she received two promotions by national decree which were signed by the governor and the minister of Justice.

Sometime after receiving her last promotion as an advisor (Medewerker Advies) she stumbled upon a document with regard to the functions and salary scales within the Immigration Department and realized that her past and current salary scale did not correspond with those mentioned in the document.

Stefania sought the assistance of Inspector Lewis to review her case and a letter was sent to former Minister of Justice Cornelius De Weever. Another letter was sent about a month later as she had not received a response to the initial letter.

On August 5, 2019, Stefania received a reply to her letter from the former minister indicating that an advice and a concept national decree were sent to the governor who returned her file with an attached letter.

The minister elaborated that the letter from the governor stated that Stefania’s function does not exist in the current function book and that her claim could, therefore, not be warranted until the function book is formalized.

The letter further stated that the formation plan has not yet been adopted and that it is unclear when this is going to happen.

This did not sit well with Stefania and she decided to petition the Court.

Lewis pleaded with the Court to grant Stefania her right to her correct scale conform to the draft function book, based on principle of equality.

“The governor and minister had already promoted Stefania two times based on the same draft function book, whereas those functions never existed before October 10, 2010. Moreover, the draft function book within the Ministry of Justice has been used for many other employees, but not for Ms. Stefania,” Lewis stated.

He concluded that St. Maarten is a nine-year-old country within the Kingdom and pleaded with the Court to honour Stefania’s request, “because it’s ridiculous that the Ministry of Justice hasn’t adopted a formation plan since St. Maarten obtained its country status.”

Lewis is known for his representation of his colleagues within the justice ministry in and out of the courtroom. “I will continue to fight on everyone’s behalf because what is going on isn’t right. We, the civil servants, have had enough of the injustices.” The Court will give its decision on January 17, 2020.