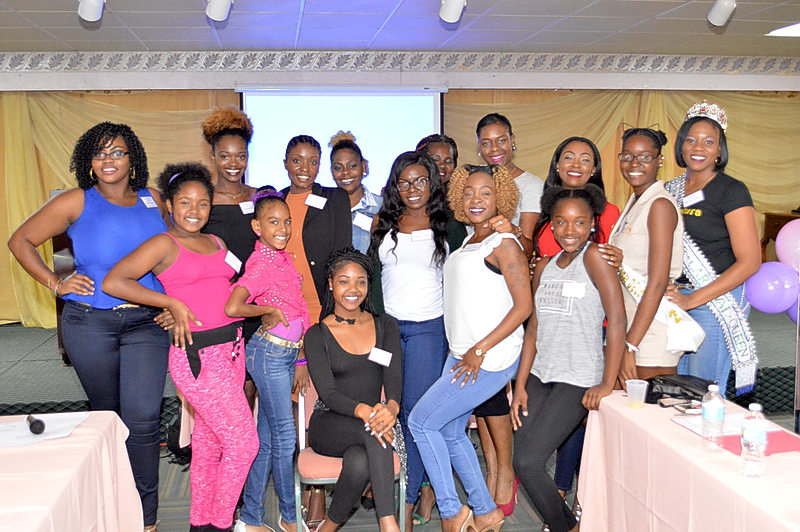 2017 Queen Pageant delegates pose for the camera after wrapping up a session with one of the presenters, D’Shnay Mathew York, at “Queen Whip 2017,” organised by Miss Mature Queen 2016 Norrisa Anatol.

The workshop entitled, “Queen Whip 2017,” started at 8:00am and ended at 5:00pm during which Anatol gathered the island’s finest professionals in their respective fields to share much-needed tips with the delegates in preparation for the pageants.

The topics covered at the workshop included public speaking, posture and walk, health and fitness, dressing, table etiquette, photography, community service and makeup application. Present at this event were 13 of the 19 delegates, who expressed extreme excitement and gratitude to Anatol for organising this event.

Master of Ceremonies Charles Rollan kept the delegates entertained during his unexpected yet energetic introductions of each presenter. The presenters, who contributed their time and service at no cost, were Amanda Vital-Bedminister, Ardwell Irion, Shirma France, D’Shnay Mathew-York, Timia Jones, Kerwan Celestine, Ananda Zaandam and Elisia Lake.

The conference room was filled with Kharisha Seymour-Foeken’s vibrant makeup products, which gave the delegates an opportunity to purchase and exchange information.

“I have been planning this workshop for the past two months and I am happy that the delegates were satisfied and open to accept the advice and positive criticism given,” Anatol stated.

The queens also shared their personal experiences as past delegates and the importance of remaining focussed. The delegates were then presented with certificates of participation and goody bags filled with cosmetics sponsored by Manrique Capriles.

“A heartfelt appreciation to Manrique Capriles for sponsoring the goody bags and Kharisha Seymour-Foeken for displaying her makeup products. Thank you to all presenters for sharing fundamental tips to the delegates, Charles Rollan for accepting the task of being Master of Ceremonies and Nick Charles for capturing priceless images at Queen Whip 2017.”