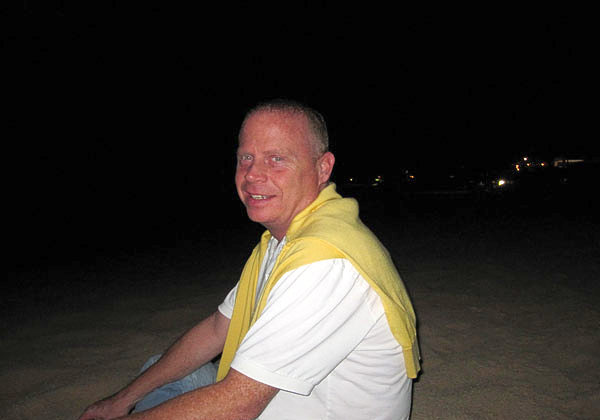 PHILIPSBURG–Family members of missing American Robert Brous arrived on the island this week after a BMW was pulled out of Great Bay on Monday. Human remains were found in the vehicle which seemed to have been underwater for years.

The family visited the police station on Thursday and met with police, who gave them the details available at this time.

Police have not yet confirmed whether the remains found belong to Brous. They will be transported to the Dutch Forensic Institute for analysing. However, word about the BMW having the same licence plate as the one reported missing seven years ago has given family and police no doubt that the remains might be Brous.

Brous was last seen on January 22, 2010. His rental vehicle, a dark blue BMW registered to him, was pulled out of the sea on Monday, January 23, 2017, seven years after he went missing.

Questions surrounding the case remain a mystery, as investigators have to find out how the BMW got in the middle of the bay and why local water-sports businesses never reported seeing the vehicle. One water-sports worker posted on Facebook that he was aware of the car in the water and did not go towards the vehicle under water because eels were around the BMW.

Brous, who was 42 years old at the time, had been staying at La Samanna with a woman companion and was last seen on Friday, January 22, 2010, but has not been heard from since. The pair checked into the hotel the day before and he rented a new dark blue four-door BMW hard-top from Prestige Auto Car Rental.

According to statements from the woman companion at the time, she felt tired Thursday evening, so the pair had dinner in their hotel room. About 10:30pm Brous said he was going out “to check out the other side” while his companion went to sleep.

“He came back to the hotel room about 6:30am to pick up some things and then left in the car,” Brous’ sister told The Daily Herald at the time. “He was wearing the same clothes that were seen in the photo published. She had taken that photo of him the night before. We don’t know what he did or where he went between 10:30pm and 6:30am. There have been some sightings, apparently; one with him in it, another with a local driving it and another sighting of the car with no licence plates.

“We believe he left the hotel with the clothes he was wearing, his driving licence, the car and either one credit card or debit card. We checked with his bank and there have been no charges or activity on that particular card in his possession since January 22.

“We think he had some cash on him, but he left his wallet with his passport and other credit cards in the hotel room.”

Brous, the youngest of seven children, had visited the island many times when his sister owned a property in Pointe Pirouette, but she sold it 15 years ago. His sister described him as an interior designer and bachelor who lived in Los Angeles and was “friendly, upbeat, outgoing and social.”

The remains found in the vehicle on Monday have been sent to the Netherlands and authorities hope to learn the identity as soon as possible. The assumption remains that the remains found were Brous’, but official confirmation cannot be given at this time.