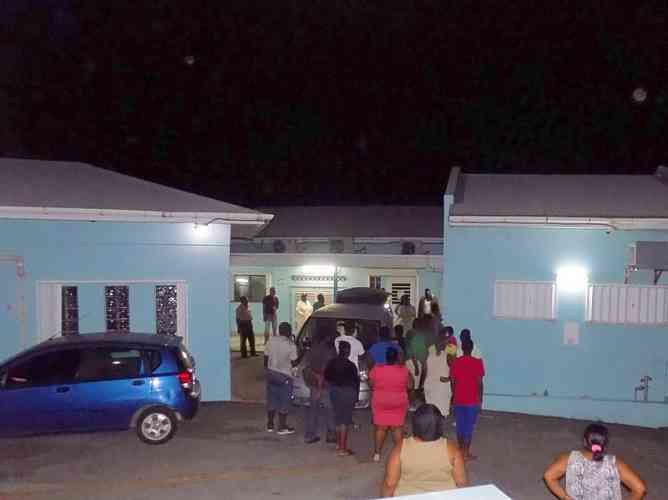 ST. EUSTATIUS–The police station in St. Eustatius received notification around 9:40 Friday that a man was missing. The man, identified as Steve P. Spanner (66) went spearfishing around noon, but did not return to his home.

A search was immediately started and his body was found in the waters near Orange Bay harbour at 10:39 pm. The body was confiscated for investigation but was soon released as the cause of death was found to be natural.

Members of the Spanner family stated that Steve had not mentioned to them that he was going diving. One family member reported seeing him entering the sea around 2:00pm.

A member of the St. Eustatius Rapid Response Team said they received a call from the St. Eustatius Police Department around 10:00pm. The rapid response team travelled to Smoke Alley Bay and within seven minutes the team was at the scene where Spanner was last seen entering the water. It took between 30 and 35 minutes to locate the missing person, who was clutching onto a buoy.

The vessel transported the missing person to Charles A. Woodley pier, where an ambulance with the doctor on call was waiting. A large crowd of family members and onlookers were also on hand.

Dr. Marije Veerman performed cardiopulmonary resuscitation (CPR) on the missing person, but after some minutes she declared Spanner’s death. His body was taken from the pier to the morgue at Queen Beatrix Medical Centre, where a large group consisting of family members, friends and members of the public had gathered.

At the medical centre, a nurse announced to the family members that they would be able to see the body 10 persons at a time.

On orders of the prosecutor M. Boheur, the body was confiscated for further investigation. Under the supervision of the acting prosecutor Senior Officer Nous, an investigation was done on the body by Doctor Veerman. At 1:13am on October 20, the body was released to the family members after it was concluded there was no foul play involved.

A spokesperson for the family of the deceased thanked emergency personnel for their quick and professional response and all those that came out to assist them with the search for their loved one.

Spanner was a fisherman by trade and loved to dive. He is the brother of former Island Councilwoman Adelka Spanner, Protocol Officer at Government Information Services (GIS) Mercedes Lopes-Spanner, and local fisherman Maxwell Spanner, who is renowned for catching Jackfish in his net.

Spanner’s death was a shock to the entire community as he was well known on Statia. He was a former bus driver of Seventh-Day Adventist/Lynch Plantation School and Governor de Graaff School.