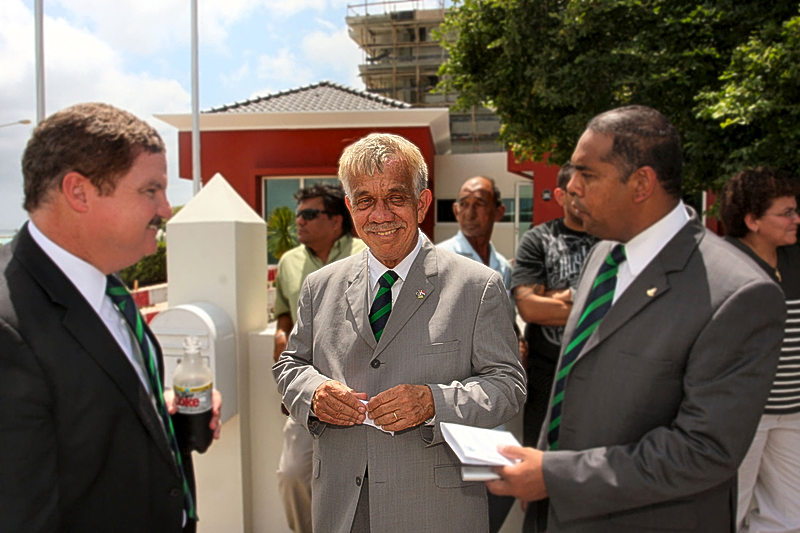 A condolence register has been opened in Aruba and in The Hague.

The Aruba AVP party, which Croes has helped to build ever since he entered the political arena in 1982, announced his death on Sunday night. The exact cause of death hasn’t been confirmed as yet, but the retired politician, known for his great knowledge and calm attitude, did have health issues.

Two months ago, Croes retired from his last job as a Member of the Council of State in the Netherlands. Croes has held positions in various Aruban and Antillean governments. He was Minister of Constitutional Affairs and Justice for the Netherlands Antilles, Minister of General Affairs for Aruba and Minister Plenipotentiary for Aruba in The Hague.

Croes was a Member of Parliament (MP) of the Netherlands Antilles for the AVP and, after Aruba attained country status in 1986, a Member of the Aruba Parliament. Croes played a crucial role in the process leading up to Aruba attaining an autonomous status within the Kingdom.

Together with Henny Eman and Watty Vos, he campaigned for Aruba’s wish to become a country, and with success, because when the AVP 1982 became part of the Government of the Netherlands Antilles, Willemstad finally expressed support for Aruba’s struggle.

After Henny Eman retired from active politics, Croes stood by and coached Henny’s younger brother Mike when the latter took over the AVP leadership. Together with Mike Eman and current Minister of Public Works Benny Sevinger, Croes fought the struggle at the level of the European Union (EU) for the voting rights of the people of Aruba and the Netherlands in the European Parliament.

Croes studied law in Tilburg, the Netherlands and did his post-graduate studies in Strasbourg, France. In 2006, he attained his doctor title at the University of Tilburg. Over the years he held functions in multiple committees, foundations and work groups, including the Aruba National Parks Foundation, the Catholic School Board of Aruba, lecturer at the University of the Netherlands Antilles (UNA), the Social Welfare Appeal Committee and the Good Governance work group.

“Few people have a more impressive and long curriculim vitae than Dr. Mito Croes. In his relatively short, but very busy life until the last moments, Mito Croes geartly contributed to his beloved Aruba,” stated the AVP in an elaborate press release.

The party praised Croes’ intelligence, know-how, steadiness and calmth. “As a constitutional expert and advisor like no other, he used his know-how and capacity for the benefit of Aruba and its people. He was sharp in his statements and analyses.”

Croes leaves behind his wife Rosita Madari, his son Pieter and several brothers. “The AVP party, the Eman Cabinet and many others commemorate a remarkable man that touched people’s lifes in many ways. Rest in peace Mito. We will miss you.”

A condolence register was opened at the Cabinet of the Aruba Minister Plenipotentiary in The Hague on Monday. At the signing of the register in the presence of a small audience, Director Shandra John remarked that the news of Croes’ passing took many by complete surprise. “Mito was a person whom you could always approach for advice on legal or constitutional matters. Aruba lost a great citizen.”