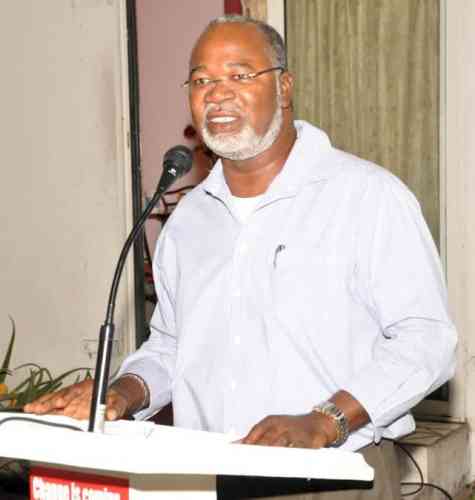 MARIGOT–Movement for Justice and Prosperity (MJP) leader Louis Mussington, reacting to Chamber of Commerce President Jean Arnell’s shock resignation, said Tuesday his party regrets there was no coming together of the Collectivité and Chamber of Commerce for a joint assessment after Hurricane Irma, instead of each entity going its separate way to present separate recovery plans.

“There’s a joint responsibility there to examine this social and economic disaster and take the necessary decisions to get the economy back up and running, but there were no joint meetings, no joint consultations, no plan of action to boost the economy, neither to create jobs, implement training programmes or protect local entrepreneurs from outside companies coming in,” said Mussington. “A tax structure could have been implemented to collect tax from these outside companies.”

“According to Arnell’s letter, the Collectivité rejected the Chamber’s request to provide the necessary subsidies to cover operational costs as well as rejecting the idea of modifying the Chamber’s status to give it more political autonomy.

“But what concerns me is the country is suffering with people wondering how they can make ends meet, and here we have two major institutions involved in a sort of a power struggle. To me it’s nonsense and irresponsible.”

Mussington also dismissed President Gibbs’ wish to have a study done on the viability of an economic development agency in St. Martin as “a waste of taxpayer’s money and resources.”

“With the sum of its missions put together, the Chamber already has adequate competence. We don’t see the sense of creating a new entity that will be very costly for St. Martin. It’s unfounded and more of an attempt to pay back certain individuals from the political campaign,” Mussington said.

He said the situation of St. Martin being under higher supervision by the French State is due to the Collectivité not putting up a strong, united front.

“It would have been in St. Martin’s best interest if Gibbs was shown to be working with Parliamentarians, the Chamber President, and opposition leaders to present a strong defence team. The State would have sensed strong leadership supporting a clear vision on reconstruction. That did not happen because it was a one-man show. So, the State proceeded to implement its plan of action which was not contested by the President [Gibbs – Ed.]. That’s a very regretful situation.”

Mussington said in hindsight Arnell ought to have addressed his resignation letter to President Gibbs in person and not to elected officials. “Arnell should know the Territorial Council is not responsible for the decisions taken by the President of the Collectivité. He should call out the President and let him know how unfairly the Chamber is treated. The business sector is counting on the Chamber and Collectivité for support. But now we are in this embarrassing and unfortunate situation.”