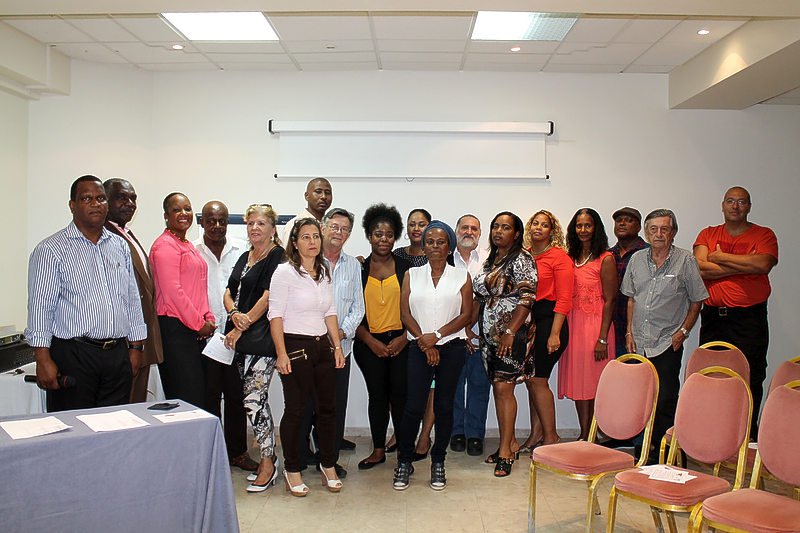 MARIGOT–Head of Mouvement Citoyen de Saint Martin (MOCSAM) Julien Gumbs presented his list of candidates for the March 19 and 26 Territorial Council elections at Le Beach Hotel on Friday evening. Not all members could be present due to conflicting obligations.

“A MOCSAM majority at the Collectivité means a reorganisation of the public territorial services so that tax payers are better served and have correct and up to date bilingual information,” said Gumbs in highlighting some of the party’s major aims. “The commitment to a simplified tax reform to increase efficiency will take place in two stages; more indirect taxation and measure to promote local employment will be applicable as of January 1, 2018, followed by a thorough reform of the property tax applicable of January 1, 2019.

“We will improve our attractiveness via major projects, for example implementing a study for the future development of Marina Royale, putting emphasis on developing the rural sector as another solution to economic recovery. In Marigot Bay we will construct a break-water that will protect the entire bay and importantly protect Sandy Ground and Baie Nettle, allowing dredging to continue for the port without risk to these districts. A pier to accommodate cruise ships will be built on the break-water from the Arago Point.

“We will also engage in the construction of a board walk around the fish pond in French Quarter district with integration of culinary and cultural “carbets” in collaboration with Conservatoire du Littoral. The pond will have activities such as kayaking and a traditional sailing school. We will also construct a motor sports complex with a moto cross and quad circuit and a 600metre long drag racing strip which will also allow Go Kart and street bike races and practise.”

Gumbs said school must be a living place for learning and knowledge sharing and not an “administrative machine producing failure.”

“As early as the beginning of the 2018/19 school year we will commit ourselves to ensuring that English is taken into consideration in the learning process and that it is gradually implemented throughout the curriculum until the end of the second cycle.

“We will create a School of Success for pupils who have failed academically and those who have left the school system without qualifications. It will teach in Spanish or English to complete a successful training. And we will not forget those young people with disabilities and they will be catered to accordingly.

“Reintroduction of scholastic sports will help to combat idleness that leads to delinquency which in turn leaves the population feeling insecure. Actions to keep young people fully occupied mentally and physically.”