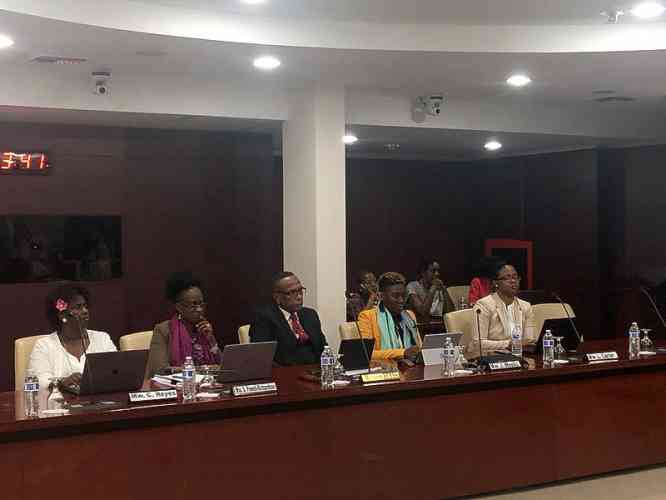 ECYS Minister Wycliffe Smith with members of his team in Parliament on Thursday afternoon.

PHILIPSBURG–Parliament on Thursday approved the appointment of seven members to the Monument Council amidst concerns by some Members of Parliament (MPs) about a possible conflict of interest with the son of a Minister being one of the appointees.

Eleven of the 13 MPs, who attended the meeting voted in favour of the appointment and the two United St. Maarten (US) party MPs voted against the proposal due to concerns about the appointment of Donovan Smith, the son of Minister of Education, Culture, Youth and Sports ECYS Wycliffe Smith, under whose portfolio the council falls.

In motivating his vote, US MP Rolando Brison pointed out that one of the members is Minister Smith’s son and he questioned whether this was a conflict of interest and he voted against the appointments. US Leader MP Frans Richardson said his faction is “taking a stand” because it believed that having the minister’s son appointed to the council represents a conflict of interest given that the minister is in charge of this portfolio. He said while the minister may not have been the one to propose his son to the position, given that he is now in charge of the portfolio, his son should have recused himself from the council. “Our faction sees this as an issue and I vote against,” Richardson said.

National Alliance (NA) MP William Marlin, who voted for the appointments “with reservations,” said he hoped to get feedback from the minister on the matter. Marlin said he was not present in the meeting of the Central Committee of Parliament when the matter was first discussed, but he said hearing the name of the minister’s son being appointed to the council does raise questions as to whether the proposal came from the minister and whether the minister had participated in a decision to put forward his own son to be on the Monument Council.

Marlin made clear that he had no problem with the candidate himself, as Donovan Smith is “a St. Maartener, born and raised here and has a right to serve his country.” Marlin said his only question is how does this fit into when the minister would have to participate in matters related to the council. He said the minister would have had to make a proposal to the Council of Ministers and he asked what role the minister played.

It should be noted that during the earlier meeting of the Central Committee on this subject, Smith made clear Donovan Smith is his son. He said the process of selection occurred prior to him taking office as minister. He nevertheless, brought the matter to the Council of Ministers meeting to determine whether there had been a conflict of interest and he recused himself from the discussions. His son was still selected by the remaining members of the Council of Ministers.

Monument Council members will be paid NAf. 75 per hour stipend for meetings which should not exceed NAf. 2,000 per month. This means that members cannot exceed 26 hours of meetings monthly. Members are not paid for meeting that they do not attend.

The four-year tenure of the former members of the council came to an end on May 17, 2017. In June 2017, the then ECYS Minister Silveria Jacobs (now NA MP) called for the submission of applications for membership to the Monument Council. A total of 18 persons applied. Evaluations and interviews were to be held in September 2017. However, hurricane Irma prevented this from happening and this process had been postponed. The minister subsequently established a committee to prepare for the interviewing process and to evaluate the applications.

When former ECYS Minister Jorien Wuite took office, she continued the process and 12 persons were selected to be interviewed. Ten attended the interviews and seven were selected. The selection was made on June 10. Parliament has to approve the appointment of the members.

The Monument Council’s is an independent advisory body, whose role is to advise the Council of Ministers and parliament on monuments; monument requests, policy matters, criteria for designation of monuments, to review and advise on appeals to owners of monuments and requests for repairs, restoration and demolition of monuments, amongst other things.

The minister made clear that the Monument Council is not to be confused with the Monument Fund. The fund provides subsidies and or loans for the restoration of monuments.