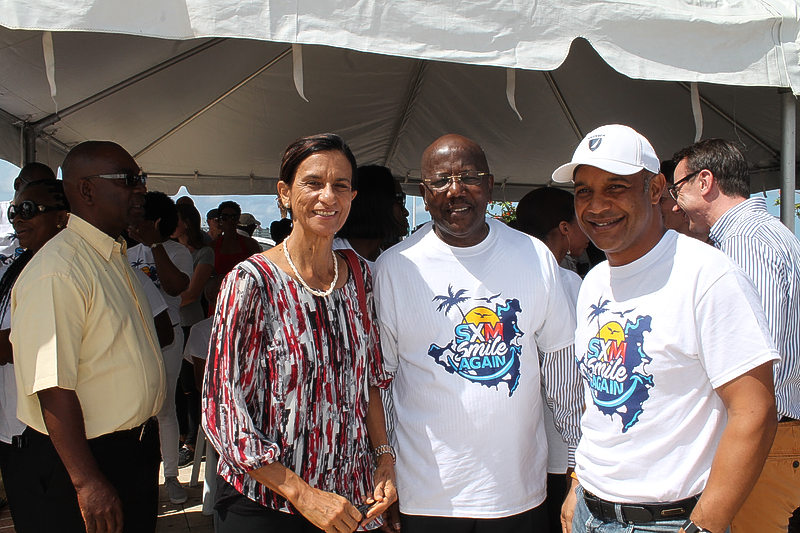 MARIGOT–“Irma not only brought destruction but she has provided us with a blank canvas to rebuild from scratch, to build you a better, stronger St. Martin, a better future for all,” President of the Collectivité Daniel Gibbs said defiantly on Sunday morning.
It was one of several positive affirmations in an emotionally-charged speech at the well-attended thanksgiving gathering on the Marigot waterfront. Scores of people from both sides of the island turned out for the event, sitting under umbrellas on the terraces or under the few tents that provided shade, listening to prayers and uplifting songs, or bonding in spontaneous groups.
“After what Irma put us through, we felt we needed a gathering to be with each other like we used to be before,” Gibbs said. “But before St. Martin can rise again, it is we, the people, that have to do the necessary to get this island back on its feet. We as government did the best we could do according to our capacity and we may not have helped everyone that we wanted to help. Our wings could not extend out as far as we wanted.
“I prefer to talk about 420km per hour winds, not whether it was category five, six, or seven. That is what we went through and survived. We came through it 22 years ago with Luis and we can get through it again. But we can do it only if we are together. I can take all criticism and I will as a leader. That is not a problem. There will be hope in this country because you have somebody who will never sink to his knees, who will keep his head high to defend you, the people, so you can get want you deserve.”
The gathering held just about a month after the passing of Irma on September 6 was considered a timely opportunity to lift the spirits of the people, to reflect on a catastrophic experience, but to make that important first step to move forward, press the reset button and start the rebuilding process.
A minute’s silence was held in memory of the 11 deaths directly attributed to Irma, Gibbs noting there were 14 deaths in total.
He expressed sincere appreciation for the support and presence of St. Maarten’s Governor Eugene Holiday, Prime Minister William Marlin, Minister of Education, Youth and Sports Silveria Jacobs, and President of Parliament Sarah Wescot-Williams. No addresses were given by the Dutch-side dignitaries, but they joined the French-side elected officials in wearing the “SXM Smile Again” T-shirts and mingling with their counterparts and members of the public.
Gibbs’ address came following a two-hour thanksgiving service from the stage. The church ministries of all religious faiths had been invited with the various pastors and choirs to give thanks and praise with prayer and uplifting songs and hymns. The congregation could follow the words on giant screens.
The event closed with a live rendition of the original song “We will smile again,” a new anthem put together by SXM Artists in collaboration with St. Martin Tourism Office and the Collectivité. The artistes included King Vers, Malaika Maxwell, Tamillia Chance, Jahny Peppah (Red Eye Crew), Ashandi, Marc G, Oswald, Natisha, Kenyo Baly, Jr. Lion, Dizzell Bueno (Red Eye Crew ) and Skelet (Red Eye Crew).
Skelet urged everyone to approach the stage and the audience joined in enthusiastically, following the lyrics on the screen. He said he had come up with the concept SXM Smile Again and then approached the artists.
“We got the whole song done during a week,” Skelet disclosed. “I wrote the chorus, but each individual artist wrote a verse, expressing their own emotions. There’s a video clip of it which will be out next week, you’ll see it on the major TV channels; Trace TV is one partner, France Antilles and others. It’s not fund-raising for money, but for food, clothing and materials to rebuild.”
First Vice-President Valérie Damaseau commented: “The people’s presence here today is positive proof that we have hope. St. Martin will smile again.”