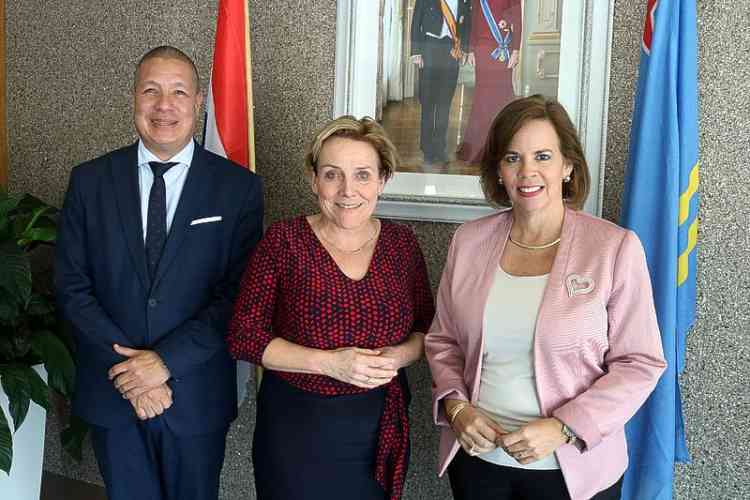 ORANJESTAD/THE HAGUE–During her visit to Aruba last week Friday, Dutch Minister of Defence Ank Bijleveld-Schouten discussed aspects of security with members of the local government. It was agreed to increase the cooperation to improve security in Aruba.

Bijleveld-Schouten and her delegation met with Aruba Prime Minister Evelyn Wever-Croes and Minister of Justice Andin Bikker. Common matters such as the Dutch Marine Barracks in Savaneta and defence in general were also discussed, but the meeting mostly focused on the issue of security on the island.

The Governments of Aruba and the Netherlands arrived at important decisions during this meeting to jointly tackle major crime, according to a press release issued by the Aruba Government over the weekend.

Wever-Croes explained that one of the agreements entailed the deployment of Aruba citizens who have completed the five-year training at the Marine Barracks. It was agreed that these trained militaries could take up jobs in the law enforcement system, including the Aruba Police Force KPA, the Customs Department or at another division of the uniformed services, to help combat crime and illegal activities.

Up to now, the members of the Arumil have to leave the Marines after five years and find other jobs outside. It was agreed that this was a waste of talent, experience and important resources.

Wever-Croes said she lamented that until now these well-trained youngsters were not fully utilised to help improve security and to strengthen the law enforcement system. She emphasised that it was important to give the Aruban youngsters more prospects and opportunities.

It was further agreed during the meeting on Friday that the Dutch Government would assist Aruba if the island was confronted with a crisis involving excessive numbers of refugees from Venezuela. A number of precautions have already been taken in this area.

Wever-Croes said the meeting with Bijleveld-Schouten and her delegation had gone very well. She said the agreements arrived at would help to make Aruba a safer place.

Bijleveld-Schouten visited Curaçao on Wednesday and Thursday last week. While in Curaçao, she was joined by Commander of the Dutch Armed Forces Rob Bauer and they met with Defence personnel stationed on the island. The Minister and Commander spoke with the crew of the HNLMS Pelikaan, the navy transport ship that provided assistance in the Windward Islands after Hurricanes Irma and Maria.