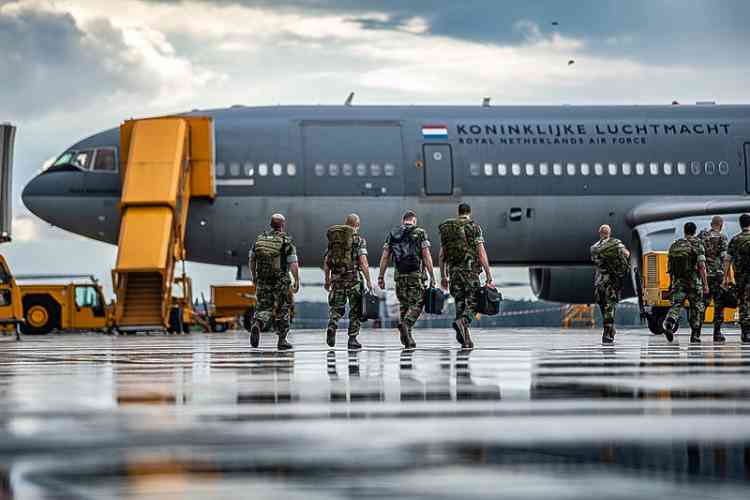 THE HAGUE–The Netherlands on Saturday sent additional military personnel to St. Maarten where the Marines will go on board of the amphibious transport ship HMS Johan de Witt which will leave soon for the Bahamas to provide emergency assistance.

Dutch Defence announced the departure of the additional military personnel from the Eindhoven Military Airport on Saturday. A KDC-10 transport aircraft of the Royal Netherlands Air Force, which was also used for transports to St. Maarten after Hurricane Irma in September 2017, brought 84 Marines to St. Maarten.

The Marines are part of the 21st Raiding Squadron of the Royal Netherlands Marine Corps. This squadron is currently on permanent stand-by as Marine Spearhead Task Unit for emergency deployment inside and outside the Netherlands.

Upon arrival in St. Maarten, the Marines boarded the HMS Johan de Witt, which together with the hydrographical research ship HMS Snellius, is being prepared to depart for the Bahamas. Provisions and relief aid have been loaded onto the two ships in the past few days. The vessels will leave St. Maarten shortly and should arrive in the Bahamas by September 11.

With the additional Marines who were flown in on Saturday, there are now 550 members of the Royal Netherlands Navy, Marines, Air Force and Marechaussee ready to provide emergency assistance to the Bahamas which were battered by Hurricane Dorian on September 1 and 2.

Also, on board of HMS Johan de Witt are 50 French and 50 German military members. They were already on board for the emergency assistance exercise Caribbean Coast in the Windward Islands and Curaçao, which has been cancelled for now, and replaced by a genuine emergency relief operation.

HMS Johan de Witt is a multi-purpose amphibious transport vessel, which can operate as a harbour, airport and storage facility. It has a large deck for vehicles and relief goods. There is a medical team on board, as well as three helicopters, two rapid intervention boats and four amphibious vessels.

HMS Snellius has advanced sonar equipment on board to chart damage under water, ships wrecks and other blockades. As such, it can be deployed to assist in making the harbours in the Bahamas accessible after the hurricane. Two specialised diving teams are on board of the Navy vessels.