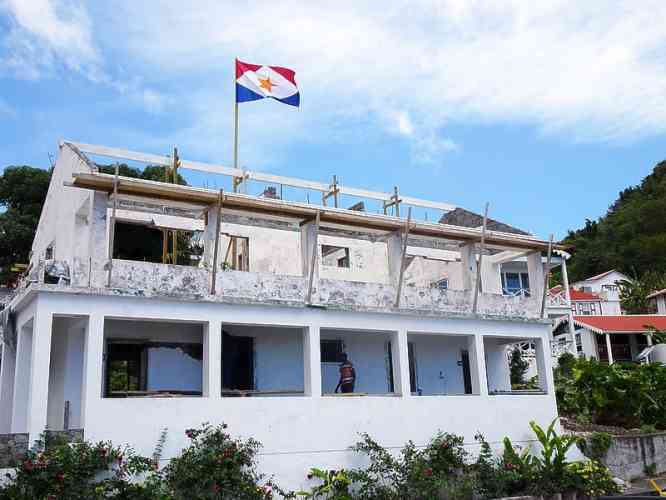 SABA–Saba will have more hotel rooms when the construction at Juliana’s Hotel has been completed and the new Saba Arawak Hotel has been built. At the same time, the promotion of the island abroad continues and local authorities keep striving to increase connectivity.

Juliana’s Hotel has started its expansion and renovation project. Four new rooms will be added to the property when a building of the former Captain’s Quarters Hotel has been reconstructed.

The captain suites will be rather large, featuring a king-size bed, 12 feet of sliding doors and a private porch. Local historian Will Johnson has offered to provide information about four former Saban captains, which will be displayed in the suites.

Juliana’s Hotel was able to acquire the former Captain’s Quarters property late August 2018. The reconstruction project focuses on one building. The other building was not salvageable and had to be demolished. The goal is to have the reconstructed hotel building open by the start of the next high season in November.

Hotel owner Johanna Schutten said the construction work is being carried out by local workers. Currently Juliana’s has 14 units in total, comprising rooms, cottages and suites. The plan is to further expand in the future. “We will do so step-by-step,” said Schutten.

There is more good news on the hotel front. Preparations have started to ready the piece of land on the outskirts of Windwardside where the Saba Arawak Hotel will be constructed. Details on this project, which will add 27 hotel rooms to the island, have not been announced as yet.

Reconstruction of the Ecolodge at Rendez-Vous has begun and the island hopes to see this hotel reopened soon.

Saba and its Tourist Bureau have been active in marketing and promoting the island. The Canadian market is being targeted with promotion this year. Saba has a year-long advertisement campaign with Escapism, a Canadian travel magazine and website (escapism.to). Saba has also been promoted in Foodism, Escapism’s sister and longer-established platform.

Horizon travel magazine, another Canadian platform with which Saba worked last year, will again be promoting the island in May. It has 226,000 readers and will be inserted into the Toronto Star, one of Canada’s most circulated newspapers.

Additionally, Horizon will be placing small commercial advertisements on its screens in PATH, Toronto’s underground walkway and shopping centre, as well as on the Yonge Street and Dundas Street screens in May.

Saba will also have an advertisement in the May edition of National Geographic Traveler.

There has also been some online promotion of the island by visitors.

Queen’s Gardens Resort was recently featured in an article on Forbes.com. In January, vloggers Kara and Nate visited Saba. They created two videos about their visit, both of which have more than 100,000 views on YouTube.

Multiple travel writers are visiting the island this year. These writers have connections to large platforms such the New York Times, Forbes.com, National Geographic Traveler and Newsweek.com. Twelve travel writers, tour operators and travel agents will be visiting in May, which has been arranged in cooperation with the St. Maarten Tourist Bureau. Some visits by social media influencers are also in the planning for later this year.

Saba will be represented at the SMART tourism conference in St. Maarten at the end of May. The representatives will have appointments with many tour operators, travel agents and travel writers. Samples of Saba Spice and promotional materials will be handed out in the vendor hall as a further enticement to visit the Saba appointment stand.

Saba was represented at the Holiday Fair (“Vakantiebeurs”) and the dive show “Duikvaker” in the Netherlands earlier this year, as well as at the St. Maarten Heineken Regatta late February/early March.

Meanwhile, the public entity Saba and the Tourist Bureau continue to work on getting more flights to the island, including the reintroduction of flights between St. Barths and Saba. To effectively promote Saba and to get more visitors to the island, Saba needs increased connectivity. This means more flights, it was stated.

The Big B, a 230-passenger, 130-foot vessel, runs multiple days a week. It not only provides service to residents and tourists of Saba and St. Maarten, but also to cruise passengers who want to visit Saba for the day before their cruise ship departs St. Maarten.

In January, the Executive Council approved a proposal by Commissioner of Tourism and Economic Affairs Bruce Zagers to have a Connectivity Plan drafted, in which the options for more and better transport to Saba are to be explored.