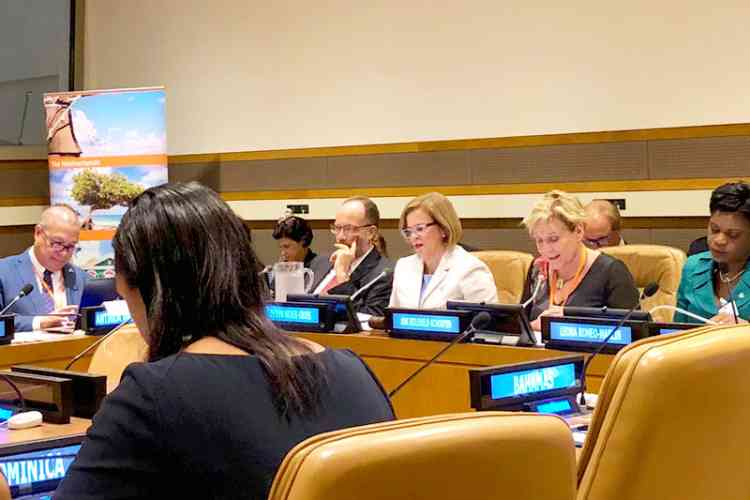 NEW YORK/THE HAGUE–Dutch Minister of Defence Ank Bijleveld-Schouten, in her role as minister for the Kingdom, said during a side-event of the United Nations General Assembly in New York on Tuesday that she wants better protection against organised crime for the people in the Caribbean.

Together with Aruba Prime Minister Evelyn Wever-Croes and St. Maarten Prime Minister Leona Romeo-Marlin, Bijleveld-Schouten led a side-event about maritime security in the Caribbean. Several Caribbean countries took part in the meeting, as well as France, the United States (US), the United Kingdom (UK) and Costa Rica.

According to Bijleveld-Schouten, the region is faced with internationally-operating criminal organisations. The law enforcement agencies’ fight against these criminal organisations involved in the smuggling of drugs and arms, extortion and money-laundering has been ongoing for many years.

All the efforts made and the results booked were not enough to solve this issue. In the minister’s opinion, the countries need to join forces to combat the dangers of drug-trafficking and -dealing. She said an increasing number of people are involved in the narcotics trade, which in turn has a destabilising effect on the Caribbean countries.

Bijleveld-Schouten urged the participants in the meeting to co-sign the Treaty of San José, also known as the American Convention on Human Rights. This convention makes it possible for countries to act more efficiently against drug-trafficking by sea and air.

Being a co-signatory to this convention is necessary due to the large scale of the Caribbean with lengthy coastlines and territorial waters, she noted. “We cannot protect our citizens on our own,” she said.

Prime Ministers Wever-Croes and Marlin-Romeo expressed support. Both referred to the problems they face as small countries, and the fact that they are limited in human and financial capacity to tackle these issues on a national front. That is why a regional approach to national security is crucial, it was agreed.