Home Local News More purchasing power for residents in Saba and Statia | THE... 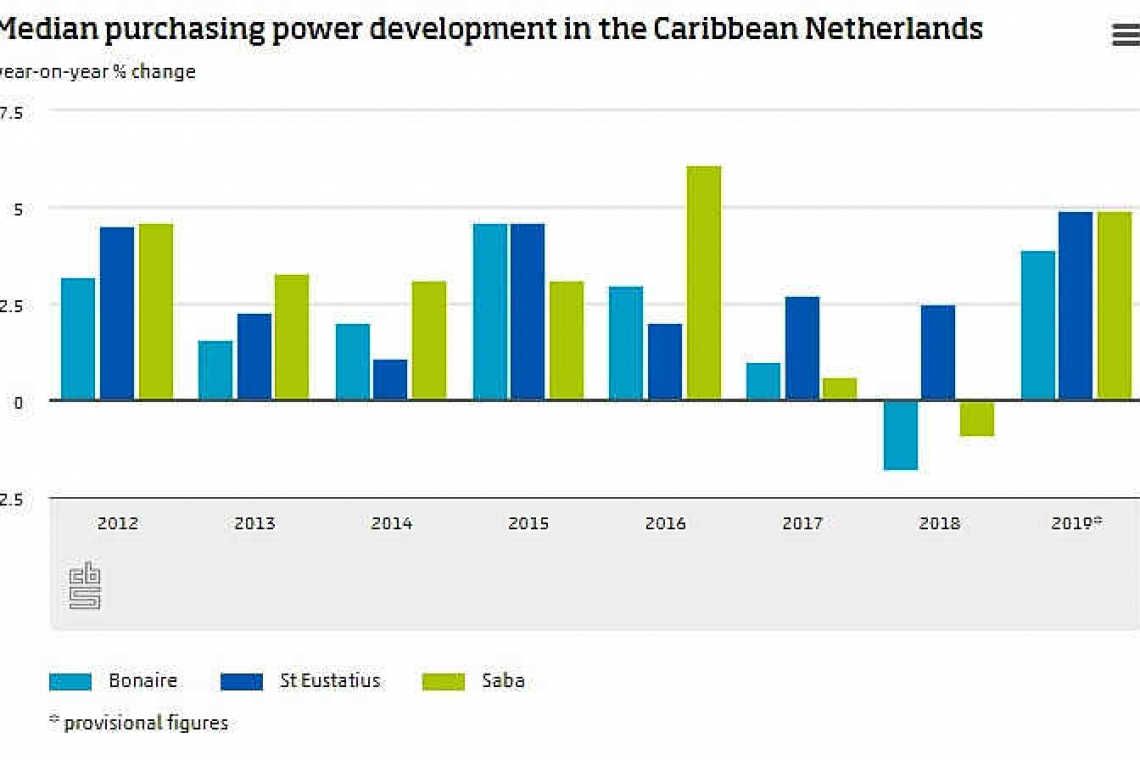 SABA/ST. EUSTATIUS–The purchasing power of residents in the Caribbean Netherlands increased in 2019 compared to the previous year, mainly due to the increases in wages, child benefit, the statutory minimum wage and other benefits.

Residents in St. Eustatius and Saba benefited from a median increase of 4.9 per cent relative to 2018, while in Bonaire this was 3.9 per cent. Benefit recipients and single-parent families gained the most, Central Bureau for Statistics (CBS) reported based on newly released figures.

The median purchasing power in the Caribbean Netherlands rose each consecutive year from 2012 to 2017. Average price levels in Bonaire and Saba increased more rapidly than incomes on these islands in 2018, which lowered purchasing power.

In 2019, a number of steps were taken to improve people’s livelihoods, boosting spending power for residents on all three islands. For example, the reduction in employer premiums for employee insurance allowed for wage increases. Benefits and the statutory minimum wage were raised as well.

The median purchasing power of persons living in households mainly depending on income from employment improved the most in Statia at 4.8 per cent.

A median increase of 4.8 per cent in 2019 means that half of the population saw their spending power rise by at least 4.8 per cent and the other half by less than 4.8 per cent.

On all three islands, purchasing power increased across all age groups. For persons up to the age of 40, the increase amounted to 4.8 per cent in Bonaire, 5.9 per cent in Statia and seven per cent in Saba.

This concerns people who are still in the process of building their careers, whose households often include children. These persons benefited from the wage increases as well as the child-benefit increase.

The Ministry of Social Affairs and Employment SZW initiated a structural reduction in employers’ premiums for employee insurance in 2019. This allowed employers to increase wages without increasing their wage cost. The premiums fell from 18.3 to 13.4 per cent in 2019. Depending on whether the employer paid pension contributions, this resulted in a wage increase of 3.4 to 4.4 per cent.

Statutory minimum wages were raised by five per cent and benefits such as the “Onderstand” income support, AOV statutory pension and AWW widow, widower and orphan pension were increased by an additional five per cent on top of the annual indexation.