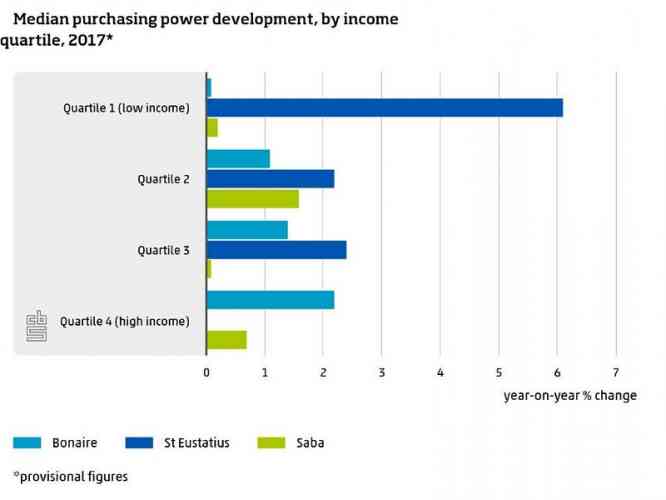 SABA/ST. EUSTATIUS–The Caribbean Netherlands once again recorded an increase in consumer purchasing power in 2017. With a median 2.6 per cent increase, the highest gain was in St. Eustatius. Mainly low-income households benefited there due to the additional increase in minimum wages and social benefits in 2017. Central Bureau for Statistics (CBS) Netherlands reported this based on newly-released figures.

Purchasing power in Bonaire, Saba and Statia has risen year after year since 2012, the CBS stated. Improved purchasing power means that incomes are rising more than the average price levels, meaning consumers can afford to purchase more goods and services.

A median increase of 2.6 per cent for Statia means that half of the population see their spending power increase by at least 2.6 per cent and the other half by less than 2.6 per cent. Purchasing power fell for 45 per cent of Statia’s inhabitants, CBS said.

In Bonaire and Saba, the (median) change in purchasing power amounted to one and 0.6 per cent, respectively, in 2017, which is the lowest increase on these islands since 2012, according to the statistics bureau.

In Statia by far the sharpest median increase in purchasing power was recorded in the lowest income brackets at 6.1 per cent, whereas recipients of social benefits gained 6.3 per cent.

In Bonaire, purchasing power improved mainly among households with the highest incomes (+2.2 per cent). Contrary to Statia, it was predominantly Bonaire’s working population which benefited with an increase in purchasing power of 1.6 per cent on average.

In Statia purchasing-power developments had a positive effect across all household groups. Single households gained the most with a median rise of 5.4 per cent. Purchasing power went up by more than two per cent among single-parent families, couples with children and other multi-person households.

In Bonaire, mainly households with children benefited – couples with children by 3.2 per cent and single-parent families by 2.3 per cent. Members of (other) multi-person households in Bonaire and Saba, on the other hand, lost some of their purchasing power.

In Saba and Statia, purchasing power improved across all age groups. With a median increase of 4.8 per cent, the most significant improvement for young households (under the age of 40) was seen in Statia. This was also the age group with the greatest improvement in spending power in Bonaire, by 2.3 per cent.

In Statia and Saba, residents over the age of 60 saw their spending power improve, partly due to additional increases in statutory pension benefits AOV. This age group benefited by 4.6 per cent in Statia and 1.1 per cent in Saba. In Bonaire, the increase in AOV benefit was lower than the increase in consumer prices. As a result, the spending power of local elderly residents declined slightly on the southernmost island in the Caribbean Netherlands.