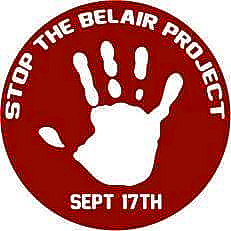 BELAIR–More than 500 residents have signed an online petition to halt the massive hotel and apartment project slated for Belair beachfront.

The petition was started just a week ago in response to the announcement by Finance Minister Richard Gibson Sr. (National Alliance) of the 326-room hotel with a showroom and 450 executive apartments.

The initiators of the petition intend to submit it to Parliament and Government with the hope of halting the project for which the ground- breaking is set for Saturday, September 17.

The petition describes the project as “secretly negotiated” by two ministers with the Chinese Government and private sector representatives of that country.

The development of this “monstrosity” of a project “will destroy the last remaining wetlands and its wildlife, that will overburden the carrying capacity of the island, that will not be beneficial to the local workforce and the local residents in general,” according to the petition.

“The fact that this deal has been negotiated without the input of stakeholders or even informing other Ministers and Parliament of such a huge project smells like corruption. We have to stop this project before it starts,” the petition reads.

The petition is available via www.gopetition.com/petitions/objection-to-the-chines-project-in-little-bay-st-maarten.html.

This online petition is not the only objection to the project. Several people have already submitted written objections to the Ministry of Spatial Planning, Environment and Infrastructure VROMI against the project that is also on review at the Yellow Building. Written objections can be filed until the end of the month.

At least three Members of Parliament who are coalition partners of NA have questioned the project – MPs Sarah Wescot-Williams (Democratic Party), Maurice Lake (independent) and Silvio Matser (independent). They have claimed the project was never discussed with them.

Nature Foundation has also questioned the project and pointed out that the area chosen is a designated bird watching zone and the habitat of a number of birds and other wildlife.

The St. Maarten Hospitality and Trade Association (SHTA) has submitted a number of questions to Government seeking clarity on the project.