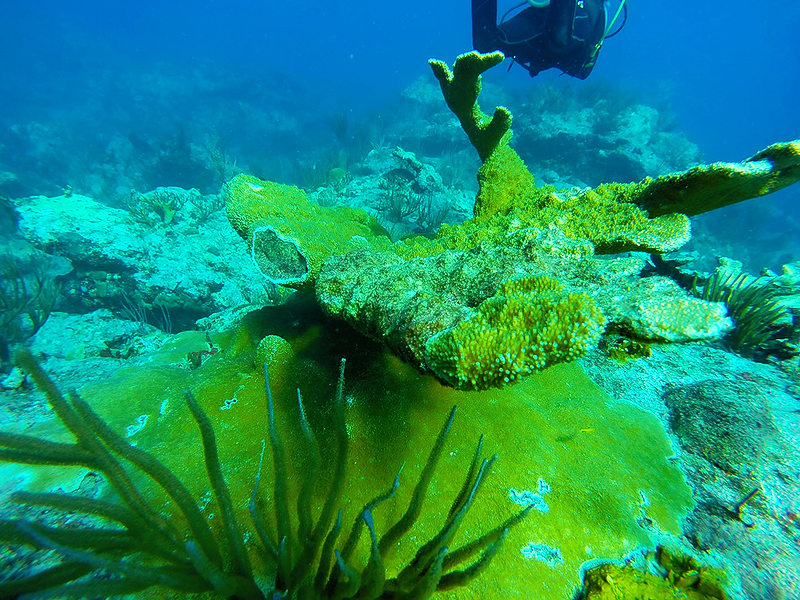 An Elkhorn (Acropora palmata) coral with many broken off branches in Man of War Shoal Marine Park.

COLE BAY–Intense impacts from Hurricane Irma have been recorded on certain coral species inside and outside of Man of War Shoal Marine Protected Area. However, also some reef recovery has already been recorded, said Nature Foundation this week.

To qualitatively assess the reefs and the Marine Park, the Nature Foundation will start up reef monitoring according to the Global Coral Reef Monitoring Protocol (GCRMN) in the coming month. Data from before Hurricane Irma and data from last year will be used to determine the detailed impacts and damage on the reefs.

The Foundation has been continuously monitoring coral reefs both inside and outside of the Protected Area to determine the impact of Hurricane Irma.

Acropora coral (Elkhorn and Staghorn) were hit the hardest by Irma: this particular group of species is very sensitive to intensive water movement, which has caused large pieces to break off. Besides the major break-off of coral fragments, also large die-offs have been recorded in those particular coral colonies.

The loss of these Acropora species will have large negative impacts on the reefs due to their importance as reef builders.

Acropora corals decreased tremendously in the 1980s and are currently already listed as “Critically Endangered” on the IUCN Red List of Ecosystems and Species. Until the 1980s, Acropora coral species dominated the near-shore zone of many Caribbean islands, including St. Maarten.

Even before Hurricane Irma these coral reef zones had almost disappeared from most islands in the region due to diseases, climate change, pollution and habitat destruction. The increased loss of these Acropora corals due to Hurricane Irma will have even larger negative effects on biodiversity, biomass of fishes, coastal protection and tourism.

Also Pillar coral (Dendrogyra cylindrus) colonies have been significantly affected by Irma. Pillar colonies have been reduced by about 70 per cent due to Irma. Colonies at the dive sites Mikes Maze and Hen and Chicks which were known to reach up to five feet are now reduced to not much more than a foot.