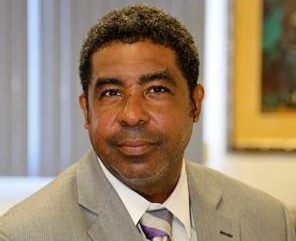 POND ISLAND–The TelEm Group will have to fork out more than US $18 million to restore its damaged infrastructure and repair its buildings to pre-Hurricane Irma conditions.

Like many other sectors on the island, the telecoms industry was hit hard by the devastating winds of Hurricane Irma, which wrought havoc in the country on Wednesday, September 5.
In an exclusive interview with The Daily Herald TelEm Chief Executive Officer (CEO) Kendall Dupersoy said it would cost an estimated $8 million to restore the company’s infrastructure and more than $10 million to repair the damaged buildings.
As for restoration of services, Dupersory said while phone and Internet services to most areas have already been restored, the company expects full recovery of these services by mid- to late November. Customers will notice improvements by mid-October.

Damage
Several of the company’s buildings sustained damage during the passage of Hurricane Irma, including the main building, which had two large holes in the roof that have since been repaired. Several glass windows were also blown in and the hurricane winds caused some amount of damage inside the building.
Luckily the company’s equipment room, where its servers are located, is concrete and was primarily unscathed. A contractor was brought in and did some major cleaning, and the regular cleaning staff also did some cleaning so that workers could assist customers days after the hurricane. Full service will now be offered at the main building as of today, Monday, for a half-day.
Of the company’s 30 cell towers around the country, Hurricane Irma took down 18. Dupersoy said that after the passage of the hurricane TelEm had 12 working towers, nine of which were still erected.
“The other towers fell over, but (some of them) were still emitting signal,” he said adding that TelEm’s services remained up throughout the storm and after the storm the signal in the Cole Bay and Simpson Bay areas had been “very good.” In the Philipsburg area, there was a site up that was covering Sucker Garden Road, Pointe Blanche and Walter Nisbeth Road to a certain extent.
As it relates to repair works to its damaged cell towers, TelEm decided to cut up some of them to create a temporary structure out of metal, strap its radios onto them and place them on rooftops so that services could be quickly restored in the interim, pending permanent repair works.
As of yesterday, Sunday, the company already had managed to have 19 of its 30 towers back up, six of which are temporary. Every day, as more towers are being repaired, service is enhanced and more areas come online. Up to mid-last week about 70 per cent of the country already had phone and internet service back up.
“We have some holes here and there and we had some challenges in, for example, Cupecoy, because we had a structure on some roofs, which caved in,” Dupersoy said.
Another challenge encountered was persons stealing the company’s fuel from its tanks soon after the hurricane, resulting in security being placed at major sites to prevent recurrences.
TelEm had its manpower out in full force soon after the storm. Its Outside Plant crew and about five contractors were out working hard to help with restoration works and securing the TelEm buildings.
Dupersoy said a lot of the company’s equipment had not gone bad. Some got wet and some switches, routers and several cards that plug into equipment were damaged. Luckily the company had some material in stock and could readily replace them. Orders were also placed and more needed items are expected soon.
“We already made an order to replace all antennas and monopoles that were damaged. Some were donated by vendors. They were helpful in getting equipment to us as soon as possible to reconstruct,” he said, adding that other items will be coming in, including from a vessel expected from the Netherlands in mid-October.

Internet
About 70 per cent of the company’s Internet infrastructure is underground, so this did not suffer too much damage. The company plans to use this opportunity to put more areas underground in the coming period.
“We are trying to negotiate with VROMI [Ministry of Tourism, Economic Affairs, Transport and Telecommunications – Ed.] and we’ve made an agreement with GEBE and UTS [United Telecommunications Services – Ed.] and we will work together to go underground. We will come up with a plan and find out where we have infrastructure overhead and start to place the piping underground.”

Cable TV
Most of St. Maarten Cable TV’s service on the Philipsburg side of A.J.C. Brouwer Road (Cole Bay Hill) is back up. However, as most of its network is aboveground on the Cole Bay side of the hill, it received extensive damage during the hurricane. Dupersoy said the company might just offer IPTV services on the Cole Bay side of the hill as an alternative to Cable TV.
“We can provide IPTV, which is the same service as Internet. I will sit with Cable TV to see if it makes sense to repair the network or just launch IPTV on that side of the hill,” he said, adding that the intention would be to eventually offer the service all over the country.
The hurricane did not dampen the company’s spirits to continue with ongoing projects. The Fibre-to-the-Home project will continue in October in Beacon Hill.