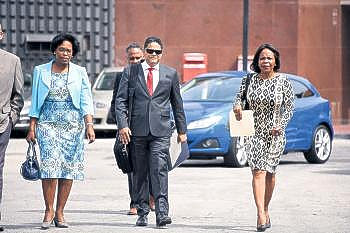 WILLEMSTAD–After PAR lost one of its four seats in Curaçao’s Parliament, leaving the proposed MAN/PAR/PNP/UKH coalition without a majority, they approached one-seat “Movementu Progresivo” (MP) of Marilyn Moses (ex-PAIS) to help form a new Government.

MP was supposedly offered the Minister of Public Health, Environment and Nature, which PAR had originally received in the negotiations along with those of Economic Development and of Social Development, Labour and Wellbeing. Moses, who is a medical doctor, said she had not yet taken any decision whether to join.

Ironically, it was the same portfolio PAR is now forced to relinquish that prompted its fraction member Edward Braam to break with the party and become an independent Parliamentarian. He learned that the function would be occupied by political leader Zita Jesus-Leito and disagreed.

“Our party campaigned with a balanced programme on public health. I campaigned for it. I believed in it. When I understood last weekend that PAR would get this ministerial post I automatically assumed I would become Minister of Public Health,” stated Braam, also a medical doctor.

However, Jesus-Leito suddenly informed the membership that she would become Minister of Public Health. Braam said he had known at that moment that his party did not have confidence in him, “neither as President nor as Member of Parliament, nor even as a possible minister. I’m always kept out of the loop.”

Braam had also been chairman of the PAR board and was number 4 on the candidate list. He had been sworn in as Member of Parliament only last week, but to the surprise of many resigned from the party and took his seat with him.

The now-independent Parliamentarian explained that he had had a one-hour conversation with the party leader from abroad during the weekend. During that talk he indicated to Jesus-Leito how disappointed he was with several things going on.

Braam returned to the island on Sunday. During the weekend the four parties involved reached an agreement on forming a new Government that was subsequently signed by 10 Parliamentarians on Monday morning.

They were waiting on Braam’s return for him to do the same, but he instead submitted his letter of resignation as PAR fraction member to the Governor and the President of Parliament, declaring himself independent.

In the meantime, it turns out another coalition was being formed by MFK (four seats), KdNT (three), PS (two), MP and Braam (one each) for a minimal majority of 11 in the 21-seat Parliament. However, the latest reports indicate that when MFK leader Gerrit Schotte went to the PS headquarters for talks he encountered former MFK parliamentarian Dean Rozier, who had been instrumental in bringing down the then-Schotte Cabinet back in 2012. This was apparently enough reason for MFK to break off all negotiations with PS.