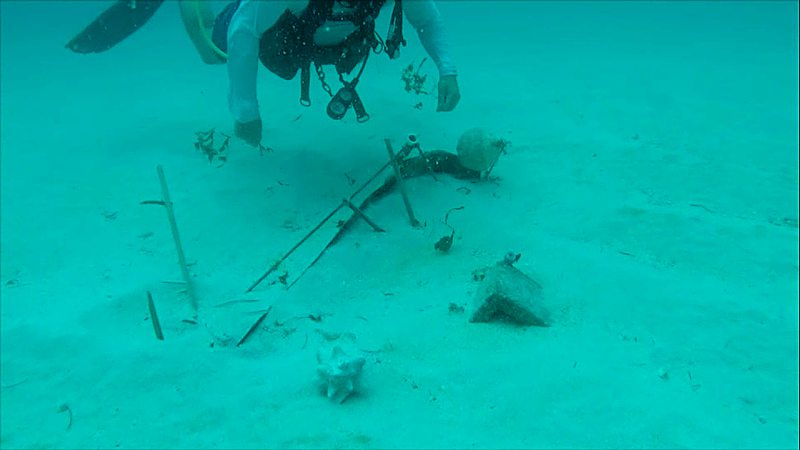 COLE BAY–Monster Hurricane Irma did not spare the underwater world from her crashing waves and strong underwater motion and surge. Scientific in-water marine research conducted by Nature Foundation, which includes a coral nursery, conch and sea-grass research and acoustic receivers, was severely damaged or completely lost in the hurricane.

Although the Foundation escaped large-scale damage to its infrastructure, with office, marine park patrol vessel and warehouse receiving minimal damage, the research projects are non-existent since Irma’s passing.
Major funding options are now sought to rebuild the marine research set-ups and restart reef and marine monitoring efforts. The coral nursery is very much needed. Corals on the reef were damaged or destroyed by direct and indirect impacts of the massive hurricane.
Topper’s Restaurant has opened a
GoFundMe.com page to help the Foundation rebuild its coral nursery. To assist, visit
www.gofundme.com/rebuild-st-maartens-coral-nursery .
The coral nursery was part of a three-year Restoration of Ecosystem Services and Coral-reef Quality (RESCQ) project funded by the European Union Best 2.0 Programme to restore elkhorn (Acropora palmata) and staghorn (A. cervicornis) coral reef zones by growing coral fragments in a nursery and transplanting corals at selected restoration sites.
Nine coral ladders were located at the dive site “The Bridge,” filled with coral fragments. Out of the 255 fragments growing in the nursery, only two little fragments have been found. The strong currents and surge probably pushed the coral ladders down or tore them apart, leaving them covered under sand and sediment.
More than one year of intensive research efforts has been totally lost, the Foundation said.
The Foundation started a juvenile queen conch growth experiment on native and invasive sea-grass beds to determine nutrition differences for conch growth. Research structures, temperature- and light-loggers and tagged conch are destroyed and disappeared from the research locations at the dry dock and barrel mooring in Simpson Bay.
Large amounts of mainly invasive sea-grass and many juvenile conchs were stripped off, disappeared or killed due to the hurricane.
The project is in collaboration with Ecological Professionals, Wageningen University and the Caribbean Netherlands Science Institute, and funded by Statia Terminals, NuStar Energy L.P. and the Dutch Ministry of Economic Affairs EZ.
None of the eight acoustic receivers or their structures was found following the hurricane. The receivers were posted in the local waters to detect the movement pattern of sharks. The Foundation was collaborating with leading scientist Dr. Erwin Winter from Wageningen Marine Research and the Save Our Sharks project funded by the Dutch Postcode Lottery for this project.