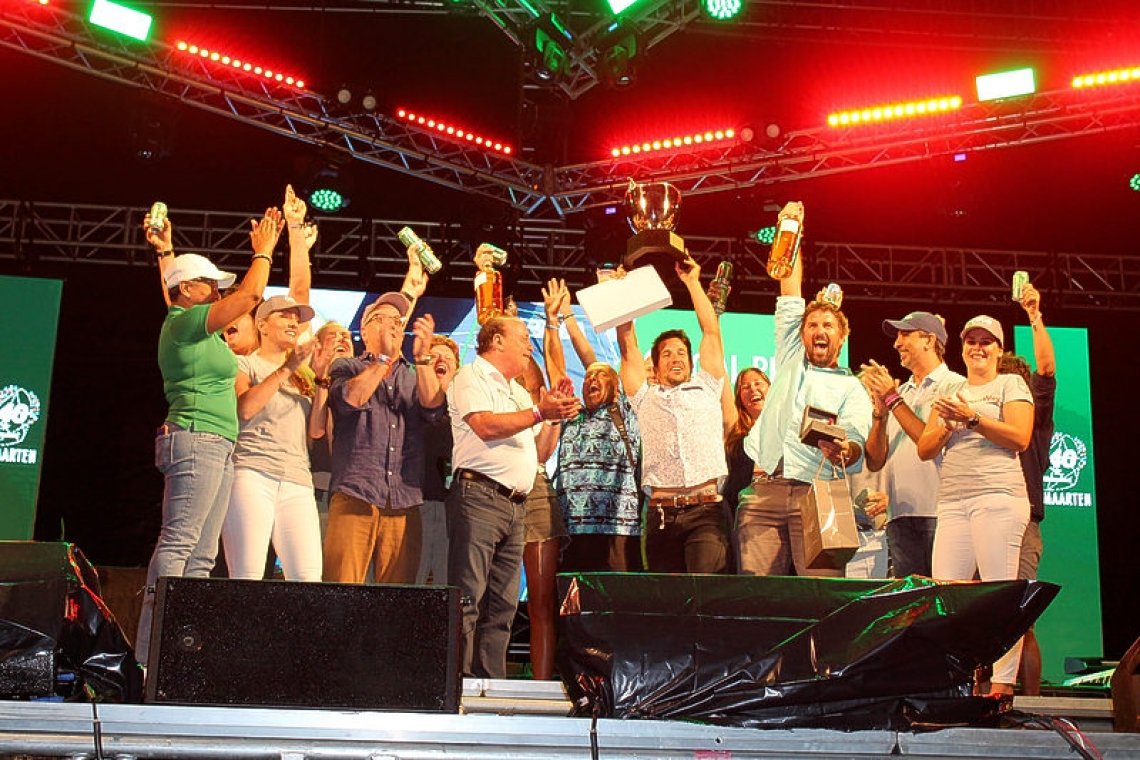 St. Maarten Tourism Bureau Director May Ling Chun presented the St. Maarten/St. Martin Cup to James Barker and crew for topping Caribbean Sailing Association group 5. Myxy tied the first race with Absolute Properties, a J 30 from Antigua and went on to win all the rest. The Trophy was presented at the awards ceremony in Regatta Village at the Princess Port de Plaisance, Marina and Casino.
Director Chun also presented the Columbus Cup for Best Bareboat Overall to Maguy-Baltics 1, winner of Bareboat 3.

CSA Ocean Racing 1
“This year the racing is very competitive,” noted one of the founders of the regatta, Robbie Ferron. In CSA Ocean Racing which featured seven Volvo racers I Love Poland, a Volvo 70 and Grace O’Malley finished the regatta level on points.

CSA Ocean Racing 1
The French boat Palanad, a Class 40, started slow with a second place in the first race and third in the second.  Palanad took first place in the next four races to win class.

CSA 4
Solstice, the J 105 from the United States won CSA 4. Solstice also started out slow with a second and fourth place finish.
The Jordan Mindich crew then strung together three firsts and two seconds for the victory. Sang Neuf, a J 109 was second and just one point ahead of third place finisher Maelia CERAC Antilles.

CSA 5
Myxy won the CSA 5. Avanti a Hanse 43 from the States was second.

Multihull 1
Arawak won Multihull 1 by just one point. Second place went to Ineffable, a Rapido 60 trimaran.
The talk of the class was the French trimaran Ultim’ Emotion 2.  Antoine Rabaste’s speedster flew around the island in under 2 hours 45 minutes 48 seconds to finish nearly 50 minutes ahead of everyone in class, but on corrected time dropped to fifth and placed fourth overall.

Bareboat 1
Eric Stallings sailing Kadans-Heinefish won Bareboat 1 on a SO 509.

Bareboat 2
Duco Kriele on Safran-Noor (d) Mannen an OC 46 won Bareboat 2.  Just one point behind in second place was Maxim Nemchenko in Ananda a SO 46.

Bareboat 3
Christian Heinritz on Maguy, an OC 45 had a near perfect regatta. The team scored five first-place finishes and one second to take Bareboat 3. Former St. Maarten Yacht Club Commodore Tom Pas raced an OC 45, Tonic III, and placed 13 in the class.

Island Time
Jason Calianos won the Island Time, also known as the Fun Class. Sailing a Bavaria Cruiser 45, Parceira, the team had two fifth-place finishes but regrouped and took two firsts for the victory.
Norbert Hoessermann on a Hanse 470 was second. Robbie Ferron on Bunglebird, a Nonsuch 33 finished fourth.

12 Meter
Three 12 Metres also competed in their own class. Stars and Stripes took first place and was followed by Canada II and True North IV.