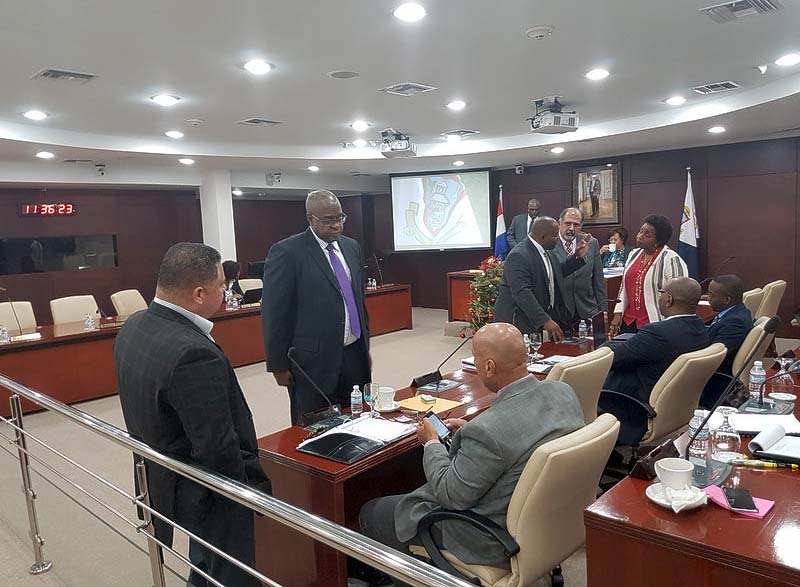 PHILIPSBURG–Government has been called on, via a yet-to-be voted on motion from Parliament, to initiate a public campaign to inform the population of the possibilities it has to make use of the tax facilities provided by General Ordinance on Taxes, such as the voluntary disclosure scheme (“Inkeerregeling” in Dutch) on how to avoid criminal prosecution under law.

The motion also calls on Government to allow for a longer period to pay taxes owed and adjust its collection policy accordingly.

Finance Minister Richard Gibson Sr. has to prepare and submit to Parliament within three months the guidelines on the execution of Articles 26 and 49, paragraph 3 of the Tax ordinance.

In essence, the motion seeks to complete the tax write off process started by former Finance Minister Roland Tuitt. That minister had issued a policy calling on the Tax Inspectorate to apply the law to write off back taxes owed up to and including 2006. The write off is based on stipulations in the law that allows for such without a penalty to taxpayers.

Gibson Sr. is therefore called on “to expedite the formalization” of the Tuitt policy as published in the National Gazette in 2013 Number 11-14, and to bring this up to par (for example to 2011) considering the statutes of limitation (“verjaring” in Dutch).

The motion was tabled by Member of Parliament Claret Connor (United People’s party) and cosigned by fellow party MPs Franklin “Frankie” Meyers and Sidharth “Cookie” Bijlani and presented to Parliament when the debate on the draft 2017 budget resumed this morning.

The motion came about because “the criminalization of non-payment of taxes or the wrongful filing of taxes has become the norm of the day,” Connor said. Also, the motion takes into consideration that public is not sufficiently abreast of the possibilities which exist by law to voluntarily correct a wrongfully filed tax return without being prosecuted for a criminal act.

“The people of St. Maarten are generally law abiding citizens who should not be left open to criminal prosecution due to unintended tax violations,” according to the motion.

The motion will be put to a vote as will the budget at the end of the debate which is now expected to be tomorrow. Parliament took a lengthy break after about three hours of debate to attend a previously planned Christmas luncheon with senior citizens.