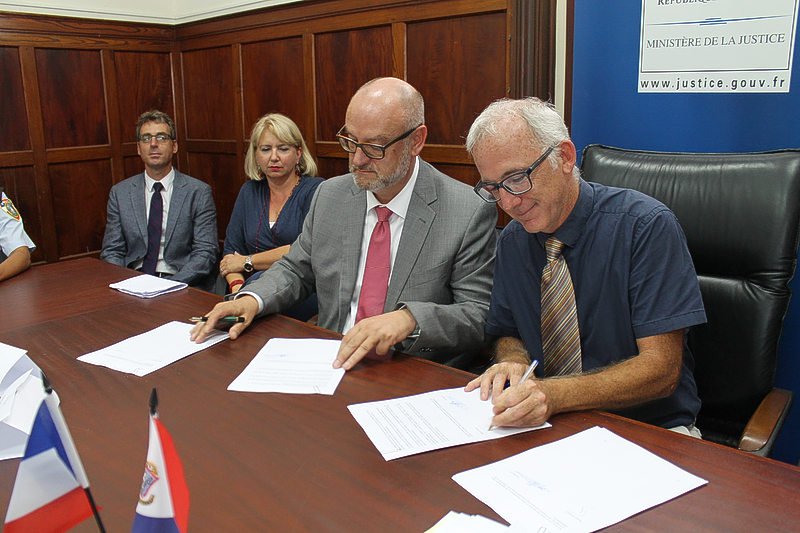 MARIGOT–The respective prosecutors from both sides of the island signed a Memorandum of Understanding (MOU), on Friday in the Marigot courthouse, finalising the text and instructions to be implemented for police cross-border cooperation, enabling barriers and international restraints that previously impeded French- or Dutch-side law enforcement from fighting crime in an efficient manner to be removed.

One or two operations in this context have already been carried out, notably the recent collection of two prisoners from Pointe Blanche prison by the Gendarmerie for a court hearing in Marigot.

The press conference was convened by Guadeloupe Chief Prosecutor Sanmuel Finielz who gave an overview of the content of the signed document. Although the Police Cooperation Treaty was drafted in October 2010 it did not come into effect until the signing by the Dutch-side government in October 2015. The respective judicial authorities have since been working together to decide on how the agreement should be implemented, not to mention it also had to be translated.

“Today, we have a final text of instructions that we all approve of and can work with,” said Dutch-side Public Prosecutor for international cooperation Nanouk Lemmers. “It’s good for us, bad for the criminals, who previously we waved goodbye to at the border.

“This agreement and instructions permits respective law enforcement agents to carry out cross-border pursuits, cross-border surveillance, and to request information on files and suspects. In short, it makes police work easier and more effective. It may in the future be extended to other fields, but first let’s consolidate these procedures.”

Lemmers said not a day goes by without prosecutors from either side contacting each on different matters. She added a good example of obtaining a better understanding of how procedures on each side work was achieved when French-side Prosecutor Yves Paillard spent time on the Dutch side with his counterparts and reciprocated when Dutch-side prosecutors were invited to the court in Marigot.

“Cooperation between both sides has been in existence all the time, but I think since we started these discussions on the agreement, cooperation has become stronger and contacts more frequent,” Lemmers added. “I hope that these instructions which are in English and French will make it easier for those on the work floor to communicate to their counterparts.”

John commented: “I must thank everyone who worked on the operational part of the cooperation agreement. It has given us smoother and better direction on how to fix our procedures, how to work with each other, how to communicate better, and how each force can use its human resources more effectively to achieve better results.”

He said his officers will be familiarising themselves with the document via series of presentations and workshops.

Commandant of the Gendarmerie Sébastien Manzoni said the cooperation agreement amounts to “not only working together but integrating together.”

Prosecutor Fimielz said neither of the two sides of the island should any longer serve as “a refuge”, shielding delinquents and their criminal assets from inquiries and prosecution. He stressed, however, that the document signed Friday is not an international agreement, but an agreement made locally between the respective prosecutor offices and law enforcement using the original Treaty as a base.

The agreement permits prosecutors to obtain information held on file on either side of the island to be transferred electronically and returned. Information can even be exchanged between the prisons in Guadeloupe and the Pointe Blanche prison. The agreement also contains a Simplified Fingerprint Information Exchange Protocol.