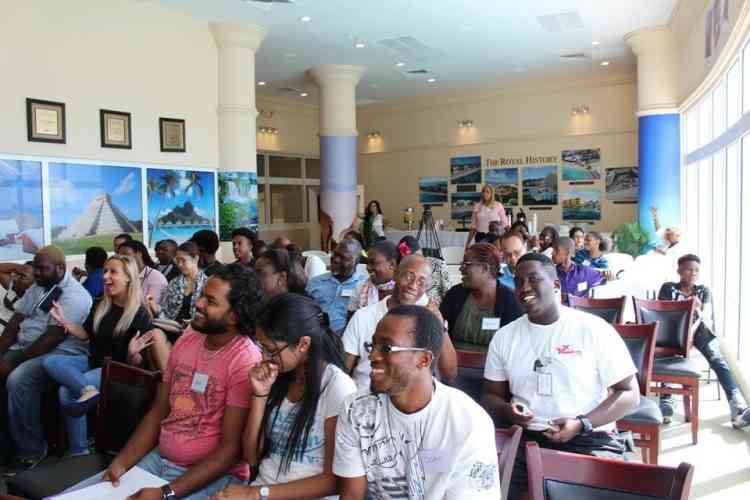 Members of the audience attending the workshops.

Attendees included the Government’s Department of Communications (DCOMM) TelEm’s marketing department, a TV station from Anguilla, students from Saba and Eustatius, and other persons interested or involved in the arts.

The intensive workshop and training sessions were given by Chicago-based film director Mark Harris, trainer and actor Simeon Henderson, also from Chicago with more than 50 films to his name, and film director and instructor in audio visual techniques Erick Alexis from Guadeloupe. Founder of SIFF, Joel Ayuk, also gave some classes on cinematography.

Such was the level of interest and anticipation between participants and instructors that the training went two hours beyond the scheduled times for the classes. At the end of the workshops participants received certificates.

The workshops covered all the different processes that go into making a film, such as writing the screenplays, production design, editing, cinematography, choosing locations, casting, directing, budgeting and so forth.

A highlight of the event was a panel discussion after lunch with invited guests Director of St. Maarten Tourist Bureau May Ling Chun and Minister of Sports, Education and Culture Jorien Wuite, with Mark Harris, Simeon Henderson, Alexi Eric, and Joel Ayuk all contributing.

“After such an enriching exchange of knowledge it was interesting for the panel to discuss the way forward in terms of potential for a film industry in St. Maarten, in terms of creating a film academy for students in school to learn about the film business and the different job opportunities they might be interested in,” said Ayuk.

Added Mark Harris: “The feedback we got from the workshop was very enthusiastic. Participants were inspired by it and really enjoyed it. You can have up to a hundred people in all those different jobs making a movie, all collaborating for the same goal, on the same page, to complete a one hour and a half movie., or even short films.

“Nine times out of ten people make movies because they are really passionate about it. It’s a business that used to be difficult to break into but is easier now. And that’s why we are helping SIFF by teaching the skill sets that can be passed onto students who are interested in the business.”

Mark Harris is the director of “Black Coffee”. He has 12 films to his name; his first film was made in 20014. “Black Coffee” was screened during a gala night at Emilio’s Restaurant for some 50 persons after the workshop.

Ayuk disclosed that “Black Coffee 2” will be shot in St. Maarten with the same directors and crew.

Roseann Rumnit is President of SIFF, Joel Ayuk is Founder and Secretary, and Majestin Gumbs is Treasurer.