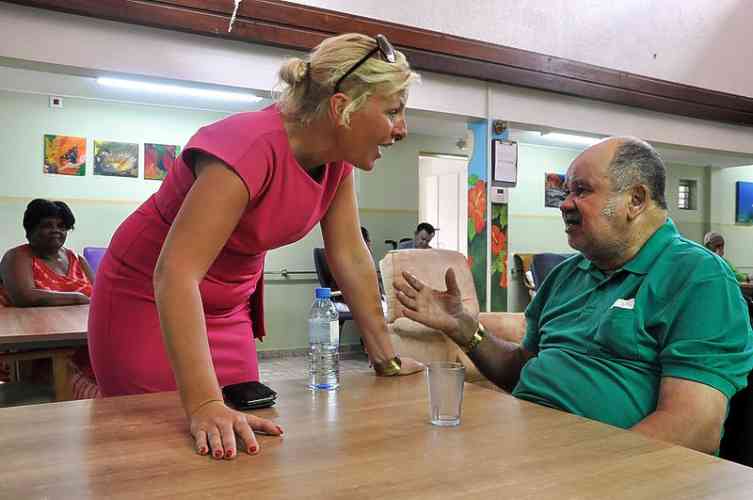 Dutch MP Attje Kuiken speaking with a resident during a visit to the home for the elderly in The Bottom, Saba, in January this year.

THE HAGUE–Member of the Second Chamber of the Dutch Parliament Attje Kuiken of the Labour Party PvdA is seeking clarity from the Dutch government on the alarming report of the National Ombudsman about the severe poverty situation of many elderly persons in the Caribbean Netherlands.

Kuiken submitted written questions to State Secretary of Home Affairs and Kingdom Relations Raymond Knops and State Secretary of Social Affairs and Labour Tamara van Ark on Wednesday, a day after the publication of the National Ombudsman report titled: “Focus on the elderly in the Caribbean Netherlands.” The findings of the report were not only published by the media on the islands, but the matter also caught the attention of the Dutch media. National broadcasting company NOS carried a story with the headline: “Hundreds of elderly people in the Caribbean barely have food.” RTL News had an article with a similar headline: “Hundreds of Caribbean Netherlands residents live in severe poverty.”

Kuiken wanted to know how the elderly pension related to the living conditions of some 2,500 elderly persons in the Caribbean Netherlands mentioned in the Ombudsman report, also considering the fact that the Dutch government has set a benchmark amount for a social minimum for Bonaire, St. Eustatius and Saba.

The MP asked the state secretaries what measures they would be taking in the short term to improve the living conditions of the elderly persons on the three islands, which are public entities of the Netherlands. “Will you also research poverty among children in the Caribbean Netherlands?”

In his report, presented in Bonaire on Wednesday, the National Ombudsman painted a very worrisome picture of the living conditions of many elderly persons. The poverty in this group is generally acknowledged, but the Ombudsman researched it and wrote it down.

The report states that hundreds of elderly persons on Bonaire, St. Eustatius and Saba regularly go to sleep on an empty stomach. At home they have no food, because they can’t afford to buy it and at the day programme, where there is food, there is often no space for them.

According to National Ombudsman Reinier van Zutphen, elderly people in the Caribbean Netherlands often lead a humanly disgraceful life: they can’t make ends meet on their meagre elderly AOV pension and they live in severe poverty. The high cost of living is one of the main reasons.

Van Zutphen lauded the efforts of State Secretary Van Ark, but in his opinion, it is taking too long to improve the living conditions of the people on the islands. “Stop talking about money. There is work to be done. Top of the list is making sure that the elderly people can have a decent meal three times a day. The rest is politics, policy and clutter,” he said.

Bonaire Commissioner of Community and Care Nina den Heyer said she was glad about the Ombudsman report. She said that the elderly, unlike the younger people, couldn’t do odd jobs because of their age. The facilities, such as public transport, for the elderly are insufficient, and as a result, this group barely leaves the house. Often, they are forced to live with their children, or the children live with them.

Den Heyer said the poverty problems among the elderly were solvable, but the Dutch government should get serious about tackling it. “It concerns a group of 2,500 people. How hard can it be to increase the elderly pension to an acceptable level so they can have a better life?”