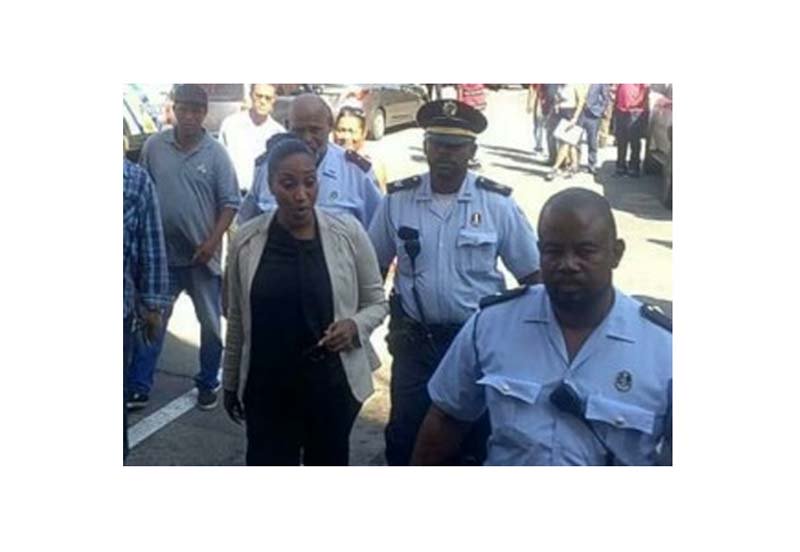 Constancia being led away by police

WILLEMSTAD–Curaçao Member of Parliament (MP) for MFK Jacinta Constancia said she would step down after assaulting and injuring MAN-fraction member Giselle McWilliam. The aggressor was nonetheless detained by police and a criminal investigation is underway.

The attack occurred during the public debate on the national decree to dissolve Parliament and call early elections. McWilliam had just spoken and mentioned the ongoing corruption probe into paid for but undelivered mouth-caps when Constancia was Health Minister, in which the latter is still a suspect.

Constancia walked up to McWilliam from behind and suddenly dealt a fierce blow to the side of her head, causing the victim to bleed from the face and leaving her visibly bruised. She went to the hospital for treatment later.

Afterwards Constancia apologised to McWilliam, saying she had gotten angry because of the remarks made. She also indicated that she would resign as parliamentarian.

McWilliam’s fraction colleague Elsa Rozendal was first to react to the attack, calling it totally unacceptable. The meeting had been suspended immediately following the incident and Constancia was arrested.

McWilliam filed a complaint against her, as did Rozendal for threats made. The Prosecutor’s Office has opened criminal investigation.

MFK in a press release also apologised to McWilliam and the people of Curaçao, saying it disapproves of physical aggression against anyone.