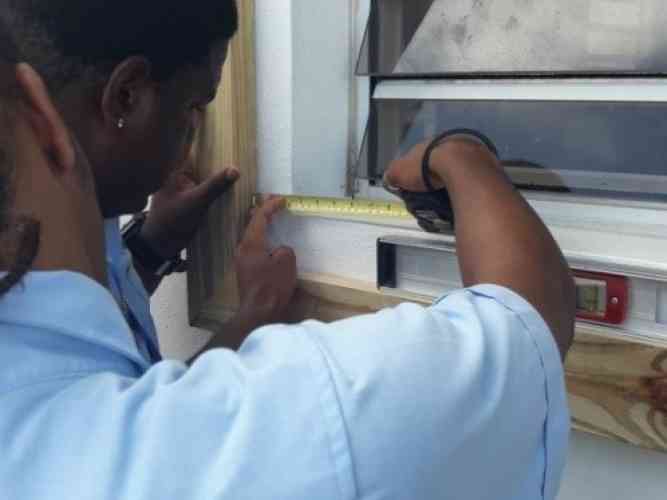 SOUTH REWARD–Exam students in the Milton Peters College (MPC) building construction class, with the help of cadets from Veva College in Tilburg, the Netherlands, and White and Yellow Cross Care Foundation (WYCCF), recently completed the fabrication and installation of hurricane shutters on homes that WYCCF is refurbishing as part of its post-Hurricane Irma rebuilding project.

The project was sponsored through a fundraising effort of marine cadets in the Netherlands, who were able to raise 6,000 euros for the initiative.

While the cadets were making preparations for their visit to the country, MPC’s building construction students and teachers fabricated the shutters in class as an extra assignment for which their grades included how professionally the installation was done.

The cadets arrived in the country on October 8 and used MPC’s gym as their sleeping quarters. They quickly got to work assisting students in completing the final preparation of the shutters. The cadets also passed along information to students, as they had been “very interested” in the experiences as potential marines.

After the shutters were completed, students, cadets and Liccom employees began installing them at homes in Middle Region. Within two hours, the teams had made tremendous progress and the skills of students and cadets were evident. Installation was completed within a few days, MPC said in a press release on Friday.

MPC management officials Vital Carty and Richard Garrin were on hand as observers and said students “proved that they are well on their way to becoming professional tradesmen that will be a great contribution to the labour force on the island when their education is completed.”

MPC also thanked the cadets for their contributions and time, along with teachers Jose Rey, Frank Elstak and Lugard Mendoza, the building construction exam class, and Liccom “for helping to build a better St. Maarten.”