Home Local News MPC & Sundial ready to reopen once they have electricity, water 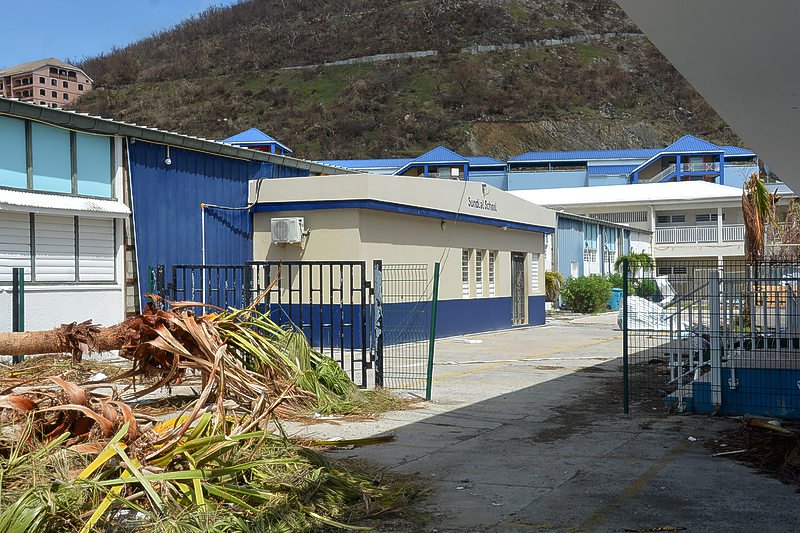 ~ Damage to both schools runs into millions ~

SOUTH REWARD–Milton Peters College (MPC) and Sundial School are ready to reopen their doors starting with exam and pre-exam students once they have been provided with electricity and water and have received the green light from Education Minister Silveria Jacobs, General Director Wim de Visser told The Daily Herald.

Although both schools suffered damage during the passage of Hurricane Irma, most classrooms are set to start.
“We are ready to reopen when we have current and water and the Minister approves the reopening of schools,” De Visser said. “We cannot make a decision on our own. It should be a joint and wise decision. We also have to consider transportation and the safety on the roads. We plan to start with the exam and pre-exam classes and even more classes when we have the teachers in. That depends on the airlines that can come to St. Maarten.”
A total of 26 of the 120 teachers at both schools were evacuated off-island following the passage of Hurricane Irma and they have indicated that they will return as soon as schools reopen, De Visser said. Most of the teachers had evacuated to Curaçao and the Netherlands.
MPC sustained significant damage during Hurricane Irma: the old gym was destroyed; in the A building the roof was partly gone, there was a lot of water damage and looters went into the institution; in the D building, the roof was partly gone, there was a lot of damage on the first floor and there was water damage in almost all classrooms; there were holes in the roof of the H building; the windows in the new gym were damaged; and louver windows were broken in all buildings.
De Visser said the other buildings at MPC were “fairly okay.” There is general water damage, most of the computers are safe and the school’s campus has since been cleaned up and the military has since been stationed at MPC.
At Sundial School the gym collapsed, the roof was blown off of the entire hospitality wing and everything was lost, including items in the arts classroom and the drama room. Other damage includes louver windows broken everywhere, water damage in classrooms and damage to schoolbooks. A total of 16 classrooms at Sundial School are okay for use, De Visser said. The campus is now cleaned.
At the School Board for Secondary Education SVOBE, which is located in the same compound as Sundial School, windows were broken in the office, doors were damaged and the fence of the school campus was destroyed, amongst other damage.
“All in all, there was severe damage at Sundial and it will cost millions to repair. However we can start teaching as soon as we have current and water at the schools,” De Visser said, adding that the school’s Hospitality students can use National Institute for Professional Advancement (NIPA) if they are allowed to use that facility. “MPC is ready to reopen as soon as we have current and water.”
He said the damage sustained at MPC ran into hundreds of thousands of dollars. De Visser estimates the damage to learning equipment can be in excess of US $100,000.
“We want to rebuild with a positive mind-set and the willingness to do even better. All should join forces – the country, the schools and the families of our students. Let’s take care of each other and listen to the needs of each and everybody. A lot of students and teachers are traumatized by this. We should lend each other our shoulders and ask questions how everyone is doing, not judge,” he said.
“I thank the ministry for their good work. We also receive a lot of support from Dutch schools and schools in Curaçao and Aruba. They started collecting donations for our St. Maarten schools and welcomed students who left the island for the time being. It is amazing. We are very thankful.”