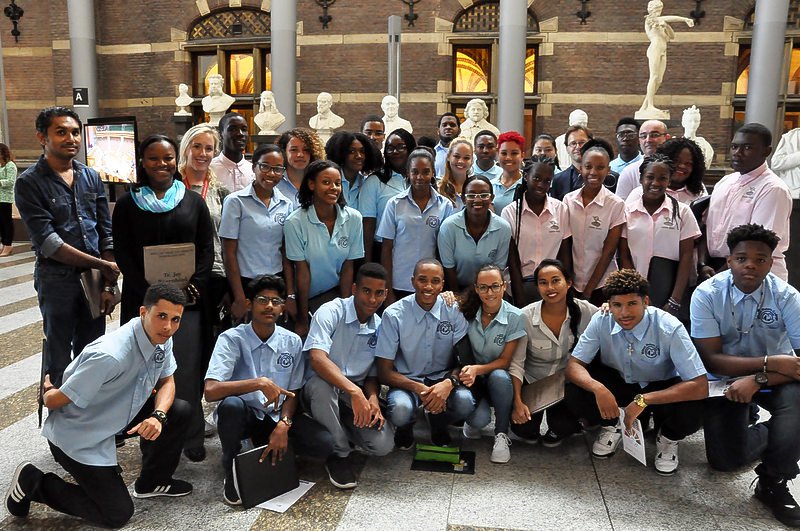 THE HAGUE–A group of St. Maarten students of Milton Peters College (MPC) and Sundial School are currently in the Netherlands for an orientation visit and study trip. Part of the programme was a visit to the Second Chamber of the Dutch Parliament on Wednesday.

Accompanied by five coaches, the group of 28 students took the Second Chamber where they were met by Member of Parliament (MP) Ronald van Raak of the Socialist Party (SP). The group had a two-hour meeting with Van Raak.

“The discussion was very inspiring and I have learnt a lot from these youngsters. We talked about their impressions of the Netherlands and their lives in St. Maarten. We talked about corruption and politics, but also how we can offer more perspective for St. Maarten youngsters and give the island a better future,” said Van Raak afterwards.

The MP called it “fantastic” that the schools prepare these students for their future studies in the Netherlands. Preparation of these VWO, HAVO, PKL, TLK and PPL students in their final exam year is exactly the purpose of this trip, said coordinator and MPC biology teacher Paul van den Hoogen.

For many of the students it was their first trip to the Netherlands. “They are learning about how it is to live on your own in a faraway country. They are getting acquainted with the country where they will be studying. This trip will help them to make the right choice for their tertiary studies and it will limit the switching of studies,” said Van den Hoogen.

This was the first time that a group of MPC and Sundial students came to the Netherlands. “Hopefully it won’t be the last. But it depends on finances. Trips such as these cost a lot of money and much preparation,” said Van den Hoogen.

The students worked hard to gather sufficient funds for this trip. Sponsoring was sought, collections were held and various activities, such as car washes, were organised.

The students are enthusiastic about the trip. “It is a very good orientation. But it also contributes to us getting to know each other better as a group. We share rooms, we cook together, we learn to cooperate. We orientate on what and where we want to study,” said 6 VWO student Louisa Halman of MPC.

“Some of us had never been in the Netherlands before. The Netherlands has a different culture, a different society. We learn how to use the public transport, how to live here. It is a great motivation to get your diploma and to further your studies,” said 6VWO student Yasmin Essed of MPC.

Essed said that the St. Maarten students with whom they spoke told them about the struggles that they sometimes faced, and shared good advice. “In the meeting that we had with Van Raak, one of the Sundial students said that without this trip, she would never have been able to orientate for her future studies.”
Source: Daily Herald
MPC, Sundial students on study trip in the Netherlands