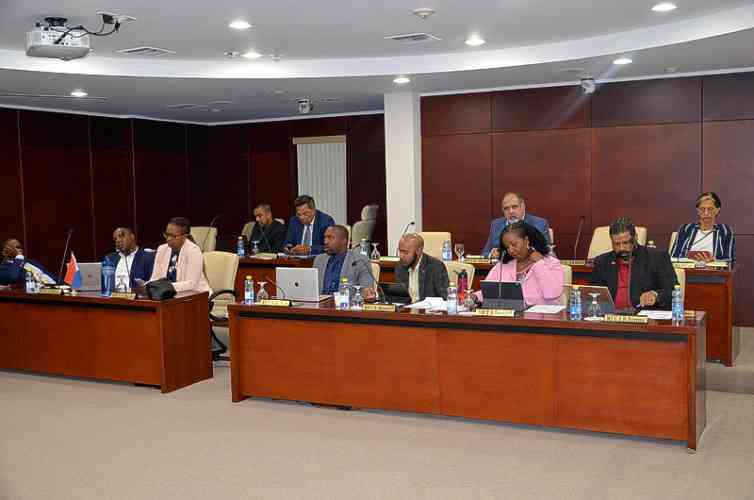 PHILIPSBURG–Members of Parliament (MPs) on Tuesday approved its first “interpellation request” to call in three ministers to Parliament to answer specific questions provided beforehand, on the reconstruction of Princess Juliana International Airport (PJIA).

The request was passed by 10 votes for and one vote against during Tuesday’s plenary public session. National Alliance (NA) MP Christophe Emmanuel voted against the request. The approval will go down in history as the first time Parliament made use of its right to interpellation in its nine-year history.

The second paragraph of Article 68 further stipulates that once the meeting has approved the proposal, it will be forwarded as soon as possible to the relevant ministers. Marlin cautioned that the right of interpellation is “a heavy instrument/tool” of Parliament because it can expose conflicts between the government and Parliament and hence is used sparingly.

In a letter motivating her request to use the interpellation tool, Wescot-Williams said the reconstruction of PJIA is a matter of ongoing debate and concern. She said statements by different ministers have unfortunately not contributed to putting to rest the prevailing sentiment that the plans to reconstruct the airport, the airport’s financing and the US pre-clearance plans are not synchronized between the airport companies and their shareholders. “In other words, we don’t seem to have our act together.”

She said also that several international partners are in one way or another involved in one or more of these matters, and “the apparent lack of one vision from local authorities and stakeholders, in my view, places St. Maarten in a negative light and weakens the country’s position.”

In her request, Wescot-Williams also posed 10 questions for the three ministers to provide answers to Parliament on. She asked whether there is a firm agreement amongst government, PJIA and all other involved stakeholders on the World Bank/Trust Fund financing proposal for the reconstruction of the airport, and if this is the case to list the name, function and date of approval.

She also asked what the delay is in proceeding in accordance with this agreement; whether the airport is still desirous of seeking other financial options and if so, what the terms and conditions are for other potential financiers.

She queried whether the airport is still engaged with potential financiers it had approached in the earlier stage of its reconstruction efforts; whether there are interested organisations and/or firms on hold or have these talks been terminated and whether is it permissible under the World Bank/Trust Fund agreement to simultaneously pursue other options for financing.

Other questions covered the current financial position of PJIA and its operating company PJIAE; the precise (re)construction plan or layout for the airport; whether a US pre-clearance facility can be included in the plans at this time and whether it is already known of the envisaged pre-clearance what is required, financially feasible and economically beneficial.

Marlin made clear that it will only be the questions provided by Wescot-Williams in her request that the ministers will need to answer.