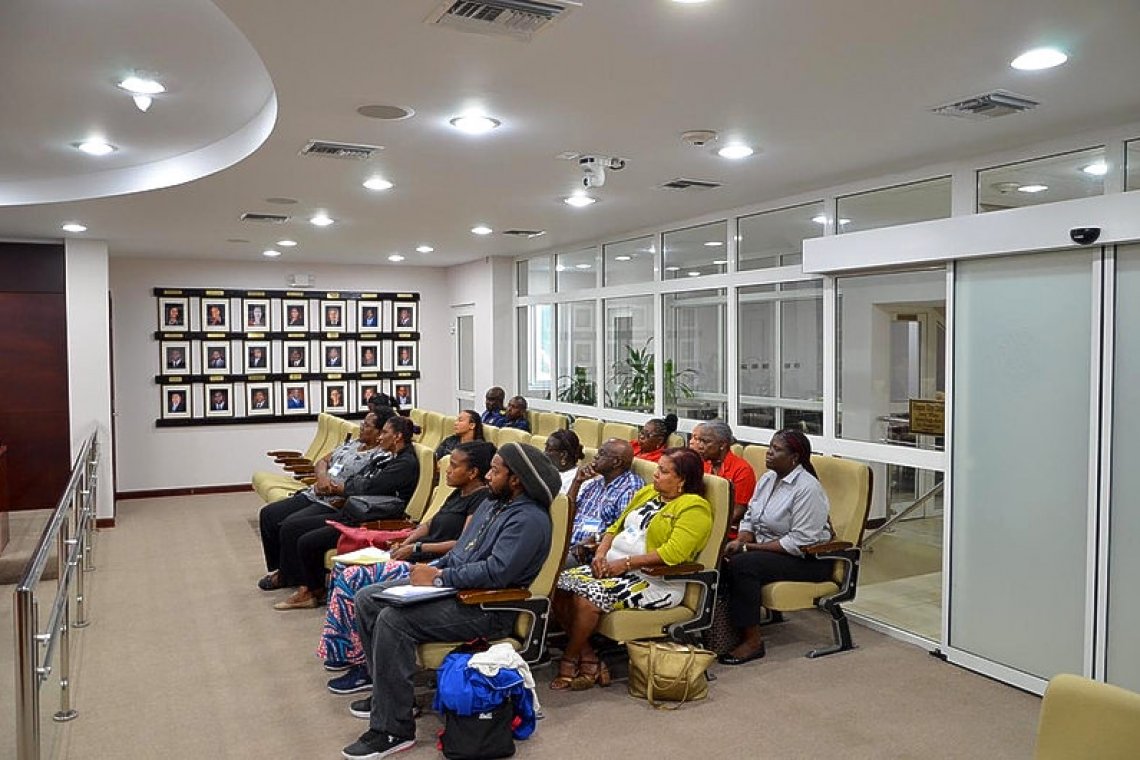 Representatives of trade unions in St. Maarten were out in full force during Thursday’s meeting.

PHILIPSBURG–Several Members of Parliament (MPs) expressed concern on Thursday about aspects of the draft national ordinance amending the pension regulations for civil servants. At least one MP suggested that the draft be revisited and resubmitted to Parliament.

“I have sat on both sides of the table and I understand the dilemma, but I do believe that if an ordinance is being submitted to Parliament it should have the full support of government and government should be able to convince Parliament to support and vote for this law,” St. Maarten Christian Party (SMCP) MP Wycliffe Smith, a former Prime Minister, said during the meeting.

“It seems as if this is not the case at all and therefore I would want to suggest to government to go back to the drawing board and review especially the areas that are troublesome … and that the law comes back revised so that Parliament would be able to take a decision on it, but right now government does not convince Parliament that this law needs to be passed at this particular time,” Smith said.

The draft also aims to amend the National Ordinance on the age limit for civil servants, the redundancy pay regulation for government officials, and the retraction of the long-term allowance regulation for pensioners of 1943.

In elaborating on the draft, interim Prime Minister and Minister of General Affairs Silveria Jacobs said civil servants’ pension is the most complex part of their legal position and is also a sensitive and expensive subject.

She said it had become clear in 2015 that the present pension plan was no longer sustainable. Government has had great difficulty in meeting its financial obligations and with General Pension Fund Administrator APS’ reported findings that the sustainability of the fund was in jeopardy and that APS would be seeing decreases in the cover ratio sinking below 100 per cent.

“With the understanding that increasing the premiums was not an option, reform was made the choice in order to ensure that in 10 to 15 years there would be pension to pay to civil servants. The draft National Ordinance that is before you today is the product of that reform,” she said.

In an effort to ensure a smooth transition, a workgroup was initiated to assist government with the changes in the draft law. Jacobs said the goal of the reform from APS’ standpoint is to ensure that the pension scheme is financially sustainable. That means that it can continue to generate money on a yearly basis to pay out persons who are going on pension.

The pension covenant was signed in January 2017 and contains the points agreed on between the members of the workgroup. A consensus was reached prior to December 2016, such as the switch to the average pay pension scheme, the increase of the pensionable age to 65 years, and the one-time increase of pension entitlements by 10 per cent of accrued rights.

Advice on the draft was received by several stakeholders. The General Audit Chamber issued a report and recommended that APS have a new asset liability management (ALM) study carried out as soon as the legislation for the new pension ordinance is approved by Parliament, which includes that Keesen Actuarissen’s recommendation be implemented to prevent the group being negatively impacted.

The Committee for Civil Servants Union (CCSU) provided a positive advice on the draft pension reform legislation from the onset. However, it was on receiving additional information, belatedly, (and the concrete examples and experiences of their membership) that some members presented objections to the draft legislation.

Members were somewhat relieved when Keesen Actuarissen said in no uncertain terms that unless there were a periodic indexation of one per cent, a group of civil servants would be negatively affected if the pension reform legislation were implemented, the Prime Minister said.

“This will be addressed in the ALM study intended to be carried out by APS following the approval of this draft legislation. According to APS, it’s required that all the calculations are re-done with the new reform. They are awaiting reform to address the issue.”

The Social Economic Council SER is also aware that government is currently pursuing a variety of social measures at the national level that are dependent on premiums, Jacobs noted.

“In order to properly advise on measures involving the payment of premiums, the SER views it necessary to receive information regarding these other social measures in tandem with the proposed legislation. We all know that this has not been done.

“The SER can only then properly advise government on its standpoint in the presence of all necessary information. Advising government on the pension benefits and premiums in the absence of the rest of the information regarding future premiums to be paid does not allow for an accurate measure of economic and social effects of the draft ordinance in question,” Jacobs said.

“Thereby my first statements as to ‘there is much that government and APS still have to do to make sure that the people of St. Maarten and civil servants properly receive what is due to them and to protect them from future bad investments.’ For these reasons, the SER advises government to research mechanisms and fiscal incentives to encourage individuals to make the necessary financial provisions for their retirement.”

She said it also had been brought forward in the last meeting that the pension fund and the AOV pension fund were not seen as the only means on which any person should have to rely. Research, mechanisms and fiscal incentives need to be encouraged for individuals to secure their financial futures as well, Jacobs noted.

United Democrats (UD) MP Sarah Wescot-Williams said she had been taken aback by the Prime Minister’s stance that she was reluctantly defending the law as government and wondered why the rush if this is the case.

“If she is reluctant, then she should retract the draft law. The PM now has to defend the request for liquidity assistance, so had hoped to push this through, yet at the same time she states her misgivings. Misgivings or not, the PM has to eventually ratify the same law,” Wescot-Williams told this newspaper after the meeting.

Independent MP Rolando Brison centred his presentation on accountability of APS. He said if APS had maintained its 105 per cent coverage ratio, then there would not have been a need to raise the pension age. “That is a fact. No age increase would have been needed,” Brison said.

He alluded to APS’ investment performance, noting that APS had lost NAf. 38 million in 2018.

Brison made it clear that it would only be with the commitment of the government to “fix” the situation related to the management of APS funds that the law would get his support. “You have the right to give that instruction,” he maintained.

He said the Minister may give instructions to the APS board to ensure compliance with obligations entrusted to the board by or pursuant to the National Ordinance on Public Servants; in order to achieve full or partial implementation of what the Court of Audit or the Bank deems desirable; in order to obtain the information desired by the minister; and where public interest requires it to a significant extent.

“Minister, if you can commit today to ensuring a fierce instruction for improved management of the people’s pension fund, I will, with a very heavy heart, approve it, but only in the hopes that this new government can ensure the people’s funds are managed properly,” Brison made clear.

National Alliance (NA) MP Christophe Emmanuel posed a number of questions and raised several concerns. He wanted to know, amongst other things, why government wanted to increase the pension age.

The meeting was adjourned after the first round of questioning to allow Jacobs time to answer the questions posed.