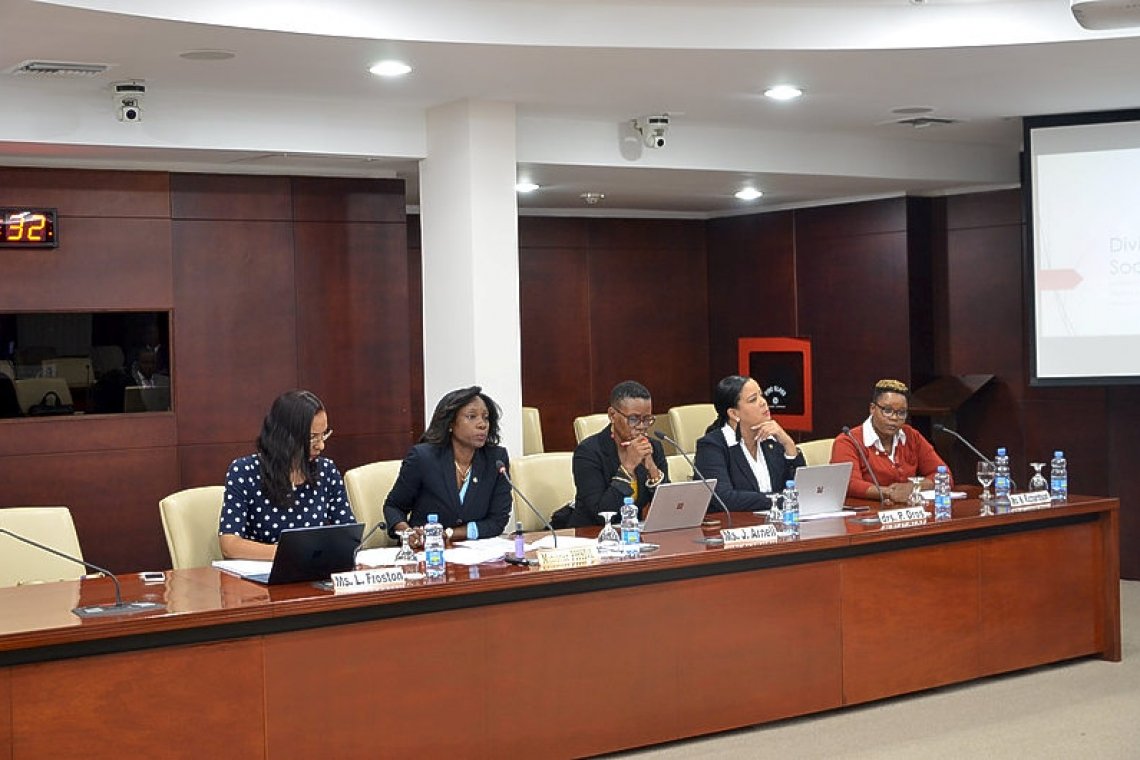 Minister Pamela Gordon-Carty (second from left) and her panel.

PHILIPSBURG–Several Members of Parliament (MPs) expressed concern on Monday about aspects of the new policy on the issuance of labour permits issued by the Minister of Public Health, Social Development and Labour VSA Pamela Gordon-Carty. For this meeting the minister was accompanied by the secretary general of VSA Joy Arnell, Head of Labour Affairs Linda Froston, Department head within Labour Affairs Peggy-Ann Dros-Richardson and Section head Natasha Richardson.

In her opening remarks Gordon-Carty said she has taken note of the concerns surrounding the new policy and her intention within the meeting would be to explain to the MPs the purpose and key areas of the policy.

According to Gordon-Carty, recently there has been an increase in large construction projects on St. Maarten, post Hurricane Irma. Seeing the need for qualified personnel, Gordon-Carty said government has invested in courses in hospitality and construction to provide individuals with the proper training in the related fields. However, most of these individuals were unable to find employment after completing these courses.

“To secure the continuation of such projects and to increase the employment opportunities for the local work force, the employment permit policy was introduced with conditions based on Article 6 of the National Ordinance on Foreign Labours,” said Gordon-Carty.

She said that unemployment remains alarmingly high on St. Maarten even though there is a growing number of people who have registered as unemployed that are qualified for various vacancies posted by businesses on St. Maarten.

The minister said, “As per Article 6, Paragraph 1 in the National Ordinance of employment on foreigners the minister can impose conditions to an employment permit pertaining to the efforts that must be exercised by an employer to fill vacancies with suitable candidates from the local St. Maarten market.”

She said within her tenure of 3 months as Minister of VSA the number of work permits she has encountered on her desk has been alarming. She questioned the large amount of work permits requested in comparison to the amount of employed persons locally on St. Maarten. The minister said she believed if given a chance at these work opportunities present, locals may very well qualify for these jobs available.

According to Gordon-Carty this is a reason for all [businesses – Ed.] to consider and make use of the new policy. “With this policy we’re giving all locals a fair chance to work,” said Gordon-Carty. The minister shared a statement from the department head of Labour Affairs which said that in St. Maarten there is ethnic or cultural recruitment taking place. “I am applying the law to guarantee that the population does not get discriminated [against – Ed.],” said Gordon-Carty.

In closing Gordon-Carty said, “The policy in question falls under the discretionary authority of the Minister of VSA. “It is up to the Minister of VSA to determine what constitutes the requisite amount of efforts that employers must undertake in trying to fill vacancies with suitable, local candidates. As such if the Minister of VSA establishes that employers are not sufficiently making efforts, or worse, circumventing the procedures by creatively presenting incorrect qualifications of functions knowing that the foreigners will be performing other tasks, the Minister of VSA is completely at liberty to establish an objective framework that is clear for everyone, to safeguard that the obligation in question namely exercised in best efforts is adequately adhered to.”

MP Rolando Brison questioned the way in which the policy was being implemented. He said there was an issue with the data being presented in regard to the policy. Brison said even if government were to halt providing work permits and present all opportunities to the locals the problem within the labour market on St. Maarten will remain.

Brison said it is not just a labour issue. He noted that other ministries within government should have been consulted on the policy from the Ministry of VSA. In a question to the Minister of VSA he asked how many meetings have been held with the study financing department, immigration, the education department and economic affairs?

“Has that level of due diligence taken place before enacting such a policy that is very much necessary?” asked Brison. “The policy is very well intended, but I don’t think it is fully thought out. It has not been sufficiently consulted and I think that it is something that we have to look at.”

He explained to the minister he reasons of one of the MPs to request the meeting. “[It is] not to say stop all efforts to protect locals from getting work, quite the contrary, please keep doing what we can but let us do so within the framework of the law, as our self, as government, before we point at the private sector because we ourselves between the World Bank, and [government owned] companies are not doing a good job. Let us also look at all aspects; education, immigration [and] economic development.”

MP Claudius A. Buncamper posed a number of questions and raised several concerns. He wanted to know, amongst other things, “are persons (locals) equipped enough to give substance to what is asked for on the market.”

The meeting was adjourned after the second round to allow Gordon-Carty time to answer the questions posed.