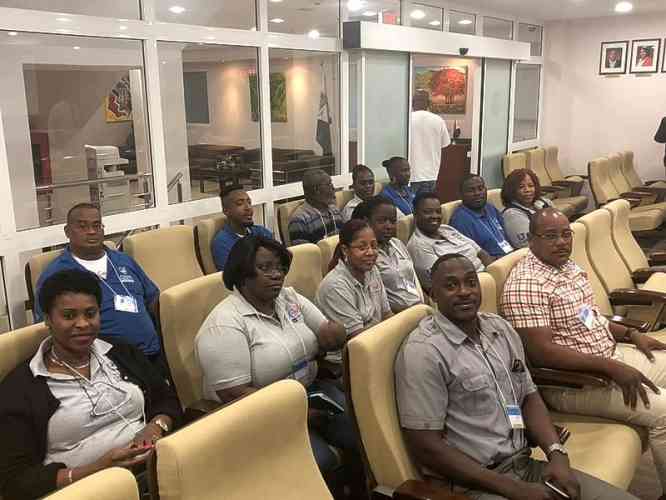 PHILIPSBURG–Members of Parliament (MPs) asked a number of questions related to St. Maarten Cable TV on Monday, including its acquisition by the TelEm Group and the status of its workers, amongst other things.

Acting Minister of Tourism, Economic Affairs, Transport and Telecommunications (TEATT) Cornelius de Weever was present at the session. TelEm’s Chief Executive Officer (CEO) Kendall Dupersoy was not present, as he is off-island attending an ICT/Telecommunications Association CANTO Conference in Trinidad and Tobago. De Weever said Dupersoy and TelEm official Helma Etnel had asked to be excused from the meeting and asked whether it could be rescheduled as they were both off-island.
The Minister said he believes that at this time in St. Maarten, particularly following Hurricane Irma, it is important to safeguard as many jobs as possible. He said he has heard complaints that while St. Maarten Cable TV payments are being made, the correct service is not provided which he said is not in keeping with the regulations of Bureau Telecommunications and Post (BTP) St. Maarten.
Democratic Party (DP) MP Perry Geerlings said the saga around Cable TV has been playing out for quite some time and it is time to find out what is going on. He asked for information on how the purchase came about.
He wanted to know whether TelEm had contracted some former Cable TV workers to render certain services for TelEm to keep the network going and whether these persons had offered their services in the form of a company that entered into an agreement with TelEm. If the latter is the case, he asked whether this is an infringement of the criteria and stipulation in the BTP licence that Cable TV held. He also asked what type of agreements had been made.
Geerlings said the entire situation “stinks from all angles.” He also asked what the intention had been in the Cable TV acquisition. He said it might be wise for authorities to take a close look at and review of all appointments that had been made.
United People’s (UP) party MP Tamara Leonard asked what the real reason was for TelEm purchasing Cable TV; what agreements accompanied the purchase; were employees to be included in the purchase and, if so, what was the agreement and had it been discussed with employees and their union.
She also asked for what price Cable TV had been purchased; whether it is true that TelEm closed Cable TV’s office in January and suddenly reopened for Channel 15 to operate, and whether an independent contractor had been hired to work at Channel 15 while Cable TV workers are being paid to stay home.
Other questions included how much was spent on legal fees so far on Cable TV litigation matters; whether there had been a bidding process for the manpower assessment at TelEm; whether Government Accounts Bureau SOAB had been contracted to conduct an audit and to “join in on” the manpower assessment and whether a company from Israel was contracted for US $25 million to carry out TelEm’s Fibre to the Home project.
Leonard said there was “clearly something fishy going on at TelEm.”
UP leader Theo Heyliger asked what was going to be purchased from Cable TV. He said TelEm had known exactly what it was buying when it acquired the company, which included the employees. He said TelEm had given out a contract shortly before Hurricane Irma for a third party to provide customer service, and asked why the Cable TV employees couldn’t provide this service instead. “Why do they need to be fired?” he asked.
UP MP Claret Connor asked whether Cable TV had been acquired or whether there had been a merger. He also asked who owned Cable TV.
National Alliance MP Rodolphe Samuel asked whether De Weever or the Council of Ministers (COM) had met with TelEm’s management team and whether the Minister and the COM shared his view. He agreed that the Government of St. Maarten should “save the jobs” of St. Maarten Cable TV workers and seek the support from Parliament to do so. Samuel said he could list a number of questions, but noted that at the end of the day, the workers just want to know if they can have their jobs.
NA MP Ardwell Irion asked whether Cable TV had been in discussion with any other companies interested in buying it and what were TelEm’s concerns should this have occurred. He asked also whether it was true that BTP has had concessions pending for months to be handled; what package was offered to Cable TV workers and what offer the union would have considered satisfactory for its members at Cable TV. He also asked whether Cable TV had requested a concession from BTP, but never received a reaction.
NA MP Hyacinth Richardson said the pain of the workers is also his pain. He asked whether the union had met with the TelEm board and, if so, what had been the outcome of those talks.
NA MP George Pantophlet said this issue is about the livelihood of the people and there is no time to play politics and games.
The meeting was adjourned after the first round of questioning and is expected to continue next week.