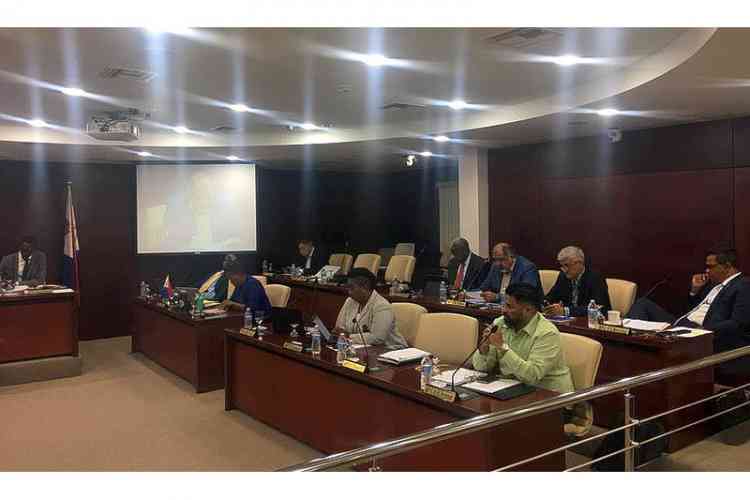 Members of Parliament on Friday.

PHILIPSBURG–Members of Parliament (MPs) expressed concern to Minister of Health Emil Lee about government owing social health insurer SZV NAf. 84.2 million, during the continuation of their Central Committee meeting regarding the current financial status of SZV and the revenue losses post-Hurricanes Irma and Maria.

The meeting was requested by United Democrats MPs Dr. Luc Mercelina and Franklin Meyers, and St. Maarten Christian Party MP Claude Peterson. The meeting was first held on November 9 when Minister Lee and management of SZV presented their financial reports to MPs.

Two of the funds managed by SZV are operating at huge losses, according to the minister. According to the information provided to MPs, while the old age, widows and orphans pension AOV/AWW, long term care insurance AVBZ and severance pay insurance in the event of bankruptcy Cessantia are financially healthy, the two largest funds – retired civil servants’ health insurance FZOG and sickness and accident insurance ZV/OV – are operating at huge losses. There are 67,000 workers under the ZV fund.

MP Egbert Jurendy Doran said fired the most questions at the minister while also giving his take on the issues facing SZV.

“I noticed from the report that SZV can cover the short- and long-term financial obligations, but if government continues not to pay, how long will this last? My next question is, how is it possible that government was able to build up such a huge debt? My assumption would be that Government built up the debt with SZV because of the same cross-funding,” said Doran.

“If it wasn’t for the management team of SZV, its director and the NA-led government in 2016 we would not have been able to move into the new government building. Irma crippled our infrastructure and it did not spare our government departments … .

“I would like to recommend that SZV considers a mobile unit consisting of a nurse that is authorised to examine patients at home that are too sick to go to SZV and wait for hours just for someone to sign a card for them.”

The meeting was adjourned until the first week of December to allow Lee to get answers for the MPs.

SZV’s total current assets as of 2017 stood at 346.8 million, including its financial assets 252.2 million, trades and receivables 40 million, cash and equivalents 54.6 million. Its total liabilities stand at 54.3 million, making the current ratio 6.39.